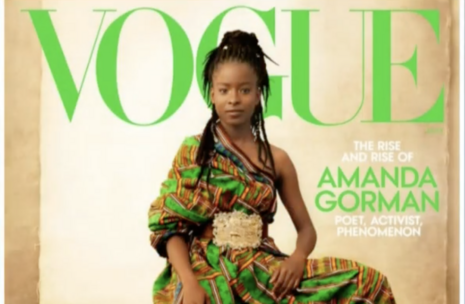 Vogue Magazine is re-affirming once again that its days of being a fashion magazine are over and that it’s a full on far left political propaganda outfit. The publication’s latest cover features the young 20-something Amanda Gorman, the “poet” who puts far left political punditry to a meter and calls it art.

Yeah, she’s the kind of once-in-a-generation artist that makes lyrics out of Planned Parenthood slogans. Who wouldn’t want a young woman who rhymes about a woman’s right to kill their unborn children to be the “first ever” poet on the cover of Vogue Magazine?

Of course, if you’re not familiar with Vogue’s new it girl, Amanda Gorman is the 23 year-old African American who recited her poem “The Hill We Climb” at the Biden presidential inauguration this past January. And ever since then she has been reveling in the glitz and glamour of media stardom.

Vogue magazine showed off the upcoming cover for their May issue on April 7, and it featured the young poet on the front, basking in the glow of a media who loves how she can spin their leftwing causes in catchy, melodramatic poetry. Yeah she’s woke all right, and in addition to her being young, and a minority, that makes her a great propaganda weapon for the media.

Consider the lyrics to the National Youth Poet Laureate’s anti-abortion ban poem: “Through forcing them into motherhood before they’re ready, these bans steadily sustain the patriarchy, but also chain families in poverty and maintain economic inequality.” So beautiful. So sublime. Listeners will also be able to feast their ears on simple beauty of the poem’s title, “8 Reasons to Stand Up Today to Abortion Bans In the United States.” Wow.

And then there’s this line from Gorman’s pro-BLM poem “Fury and Faith”: “By now we understand that white supremacy and the despair it demands are as destructive as any disease. So when you’re told that your rage is reactionary, remember that rage is our right.” The power of those words could even move distraught small business owners in Kenosha to sympathize with BLM rioters who torched their buildings.

Clearly this kind of work would attract the attention of the leftwing fashion rag. Though not only was the honor Gorman’s, but it was Vogue’s as well. This was the first time in the magazine’s over 120 year history that they featured an actual poet on their cover.

Sarcasm aside, that’s actually pretty pathetic when you think about it. So Vogue’s been around 120 years and they couldn’t find one prominent female poet throughout that time to put on their cover? Not Maya Angelou nor Sylvia Plath? Just some lady who puts baby killing and black supremacist slogans in rhyme form? Pathetic.