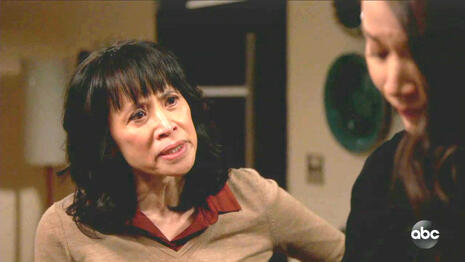 While the latest episode of The Rookie wasn’t overly saturated with a race-baiting plot, that’s not saying very much. The ABC show still continues to denigrate police officers, as it did with April 11’s episode “Man of Honor” which dubs them paid bullies for the city.

Officers Lucy Chen (Melissa O’Neil) and Jackson West (Titus Makin Jr.) are celebrating their transition from their probation period to “becoming a glorious P2” police officers. When Jackson invites Lucy out to celebrate with his family of a long line of cops, Lucy declines, saying, “Um…actually, my parents are coming over for dinner tonight. I think they’re coming around to me being a cop.”

That’s not exactly the case, though, as tensions are still shown to be high between her and her mother; her father didn’t even show up on account of having “his book club.” Lucy’s mother (Lauren Tom) has quite the choice words about how she regards police officers.

At first it sounds like typical Tiger Mom talk, wanting her daughter to get an advanced degree, but then Mrs. Chen reveals that she’s not “proud” of Lucy because she is seen as a “paid bully for the city.”

Lucy: Well, that’s fine. We can just have a girls’ night celebrating.

Mrs. Chen: Actually, I’m not here to celebrate. We need to talk about this whole police officer thing.

Mrs. Chen: Look, you gave it a year, proved you could do it. Brava. It’s time for you to do something meaningful with your life.

Mrs. Chen: Yeah. Go back to school. Get your master’s. Have a profession.

Lucy: Being a cop is my profession.

Mrs. Chen: As a paid bully for the city?

Lucy: Is that how you see me?

Mrs. Chen: It’s how a lot of people see you. Especially now. I want to be proud of you, instead of hoping people don’t ask me what you do for a living.

Lucy: Mom, can you just support me? You know, you seem happy enough for Jackson. I-I don’t get it.

Mrs. Chen: Jackson is not my child. You are. Your father and I have been very patient, supporting you as you quit grad school, followed your passions, but now, it is time to get serious about your future.

Lucy: Being a police officer is my future. I love this job. I love it. I get to help people.

Mrs. Chen: You want to help people? Become a doctor.

Mrs. Chen: Sorry to be so blunt, but it needed to be said.

Mrs. Chen: Your father and I will always love you.

Mrs. Chen: But you are risking your life for a thankless job, and we cannot be supportive of this any longer.

Lucy: Okay. Okay! Okay. I heard you the first time. If you’re done expressing your disappointment, I would — I would like some space, please. Can you just go?!

While Lucy does question her mother regarding her as “a paid bully for the city,” she doesn’t quite push as much as she could have. It’s Lucy defending herself and her personal decision to be a police officer, rather than the good work police officers do as a force.

We couldn’t expect too much, though, from a show which has been taken over by Color of Change, a partner of Black Lives Matter. While this episode was tame in comparison to previous ones this season, it’s still no less frustrating that the writers insist on inserting digs at police officers wherever they can.

By the episode’s end, Lucy’s mom seems to have come around. “I could tell you were hiding something about last night, so I called your mom, and she told me what she said to you. And I told her that if she didn’t apologize, she’s never stepping foot in this apartment again,” Jackson–who is her roommate–reveals to her. They laugh it off, Jackson gives her a St. Michael’s medal from his family, and they go out to celebrate with sushi. Thus, it’s unlikely viewers will get another chance to witness Lucy defending the good work police officers do to her parents.

Next week’s preview shows Officer John Nolan (Nathan Fillion) trying to protect his black professor, Fiona Ryan (Toks Olagundoye), from white supremacists, so that will be uncontroversial, I’m sure.

Conservatives Fight Back! This episode was sponsored by Humira, Nature’s Bounty, Gillette, Allstate, Samsung, Tide, Comcast, Xfinity, IBM, Febreeze, and Toyota. T-Mobile, Maybelline, and Liberty Mutual were repeat offenders- let them know how you feel about them sponsoring anti-police rhetoric!