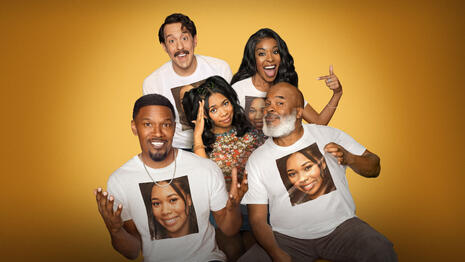 If it weren’t for cliches and stereotypes, there would be little to note about Netflix’s Dad Stop Embarrassing Me, which began streaming on April 14, a series of eight half-hour episodes. Comedian/actor Jamie Foxx tries to make a comeback on the small screen but mostly fails to be amusing or entertaining.

The story centers around Brian Dixon (Foxx) and his multi-generational black family who live under his roof (sound familiar?). His father, Pops (David Alan Grier), and sister, Chelsea (Porscha Coleman), are joined by Dixon’s daughter, Sasha (Kyla Drew), after the death of her mother. Brian and Sasha try to build a relationship as there was none before her mother’s death.

The characters are over the top. Brian takes Sasha to a therapist for counseling so that they can work on their relationship and she turns out to be a sex therapist. In another episode, the family’s church pastor is a money-grubbing showboat who continually asks for money from the members to support his extravagant lifestyle. There is a bartender character in one episode who wears a blonde wig and is a Trump supporter. He speaks to a Trump bobblehead and says, “I don’t care what the count is, you’re still my president. I love your hair. Now that you’re not president, you can come to Rusty’s and we can grab all the …” and then he laughs.

Most of the episodes center around father-daughter issues as Brian learns to be a single father, but the last two episodes take an unnecessary dark twist. In episode 7, titled “#RichDadWokeDad, Brian’s best friend Johnny, a police officer, is off-duty and in a convenience store with Brian and Pops. An armed robbery takes place and at first Johnny tries to hide but is finally convinced to act after Brian shames him into doing so. The robber isn’t afraid, though, as he notes Johnny is out of uniform, therefore off duty. He mentions that off-duty cops don’t carry armed weapons. Johnny agrees with him and the robber gets away. Then, as Johnny is explaining to Brian and the store manager that his revolver wasn’t loaded, it discharges into the ceiling. It was a ridiculous scene meant to make a law enforcement officer look like a bumbling idiot. Johnny earns the nickname of the “Cowardly Cop” after that and a video of the incident go viral and he is suspended from the police force.

In the final episode, titled “#MaybeltsBAYBelline”, the issue of police profiling and abuse rears its ugly head. Sasha, her friend Zia (Johnny’s daughter), and Sasha’s boyfriend Rahim are in Rahim’s father’s Mercedes. Rahim’s father is a judge. The kids are followed by a police car on the way home from picking up food. They turn on flashing lights in the driveway and the kids question what is going on.

While none of the kids are cooperative, Rahim is particularly obnoxious. He tells the two white cops they are on private property and to get out. When Sasha and Zia start to go inside the cops tell them to freeze and no one will get hurt. Rahim says no one will get hurt because no one did anything wrong. Sasha pulls out her phone and tells the cops she is videotaping them.

When Rahim asks them to leave everyone alone, one cops responds, “Shut your mouth, boy. We got a call about a luxury car that fits this description casing the neighborhood. You steal this car?” Rahim tells him it’s his father’s car. Then he adds, “Who you calling boy, boy?” So, Rahim is thrown to the ground and handcuffed. Rahim says, “You done messed up now, man. My pops is a judge.”

The girls freak out and they are treated the same when Sasha refuses to stop filming and put her phone away. She put the video live on Instagram. That is when Brian and Chelsea see the video of what is happening at their house. They rush home to straighten it all out.

One particularly stupid part of this storyline is when the cops recognize Johnny as he gets on the scene. One calls him the Cowardly Cop and asks him for his autograph. By the end of this ridiculous scene, the other cop says he guesses he’ll see Johnny at the policeman’s ball. Johnny tells him he is quitting the police force: “I took an oath to serve and defend. All I see here is a bunch of bullies with badges and guns and I’m not about that.”

It turns out Brian’s new white neighbors were the ones who called the cops. They saw Brian and Rahim in the Mercedes earlier as Brian tested Rahim’s driving skills, including his reflexes with sudden stops, and called the cops, thinking they were casing the neighborhood. At the end of the episode, Sasha tells Brian she wants to be a civil rights attorney.

The series misses the boat on comedic entertainment. The writers use Pops for the raunchier material and Brian just looks clueless most of the time. The series is embarrassing for everyone.