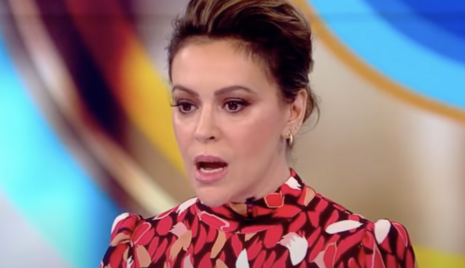 God forbid Hollywood C-lister Alyssa Milano needs the help of police anytime soon. She says all cops – maybe all of America (it’s hard to tell) – are “rotten.” She certainly wouldn’t want her pristine virtue soiled by their services.

Not even a day since Derek Chauvin was convicted of two counts of murder and one count of manslaughter against George Floyd, the left found another political opportunity to prove that America is a horrible, racist place. In Columbus, Ohio right around the same time that the verdict against Chauvin was announced, a policeman used his gun to stop 16 year-old African American girl Ma’Kiah Bryant from stabbing another girl.

Plenty of outlets reported that Ma’Kiah was wielding a knife, and subsequently released police body cam footage shows that she was attacking the girl with it when the officer fired. The officer may have saved the victim’s life, and he certainly saved her from terrible wounds. But Milano isn’t big on either caution or truth.

She made a rash tweet about the fatal shooting that was clearly based on her false assumptions about the police’s relationship with black Americans;  the same false assumptions spread by violent, Marxist groups Black Lives Matter. She used the killing as a political attack against law enforcement and America in general.

Milano wrote on April 20, “It’s not a few bad apples. It’s the entire tree. From the roots all the way up to the branches that touch the sky. It’s rotten. We must do better.”

Just like the lefty slogans which led to a summer of protests and a year of rising racial animosity, Alyssa’s post promoted the conspiracy that American law enforcement are targeting and killing African Americans disproportionately. And even though stats show that police killing black people indicative of systemic racism, she just said nope, it still exists.

Again, in Milano’s eyes that would mean the whole American justice system needs to be eradicated. Sounds convenient for the ambitious Hollywood progressive.

In addition to the America-hating BS, Milano shared a propaganda post put out on “MeToo Movement” founder Tarana Burke’s Instagram page. The post featured a photo of Ma’Kiah Bryant, alongside text which read, “Ma’Kiah Bryant. 16 years old. Called police for help. Instead… Police fatally shot her. Today. April 20, 2021.” The sentimental post added, “She was just a kid. Not a ‘young woman.’ A girl.”

Any loss of life is terrible, but to ignore the other facts of the case, like that this “girl” was trying to stab another girl in front of a police officer is evil. Unless the new rules of racial equity demand police stand down and watch black people kill each other, decency demands getting the facts before shrieking about rot. But facts are dangerous. They might give the lie to Milano’s disgusting, police-hating narrative.