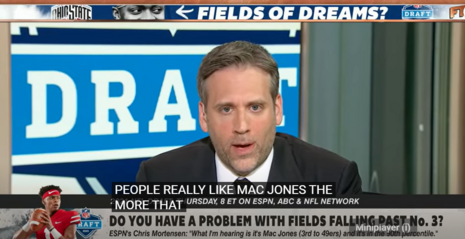 The NFL draft starts Thursday night, and ESPN has practically turned the draft order of quarterbacks into a race war. Martenzie Johnson fired the first shot, calling the NFL a “racial institution,” in his ESPN blog post. Max Kellerman predicted an onslaught of white privilege in the draft, on the ESPN First Take TV program.

At the center of ESPN’s race paranoia is Ohio State quarterback Justin Fields, an African American. In January, ESPN’s Mel Kiper projected him to go second among quarterbacks in the draft. More recently, some mock media drafts rate Fields fifth among quarterbacks – triggering Johnson and the First Take duo of Kellerman and Stephen A. Smith.

Writing for ESPN’s black-themed blog, The Undefeated, Johnson referred to “the entire football-industrial complex – for the, let’s say, racial institution that it is.”:

“When it comes to black quarterbacks in particular, the NFL has long gone out of its way to keep the position as white as the painted yard lines on the field.”

Johnson mentioned that anonymous evaluators say Fields struggles to “process things,” is selfish and doesn’t have a great work ethic. “The dog whistle is screeching.” In another rant, he says:

“Race has always been a justification for barring black players from playing certain positions, coaching or managing teams, or even playing in the sport altogether.”

Kellerman says his “radar” suggests the drafting of quarterbacks could boil down to white privilege, which may or may not be correct.:

Smith also beefed about Fields sliding down in the draft. “This brother drops to fifth … how the hell does that happen?” he yelled.

When it comes to recent history on black NFL quarterbacks, the ESPN race-baiters displayed remarkable amnesia.

In 2011, Auburn’s black quarterback Cam Newton was the overall No. 1 pick in the draft.

In 2015, Florida State’s black quarterback Jameis Winston went No. 1 overall in the draft. The second player taken was another minority quarterback: Marcus Mariota, of Samoan and German descent.

In week one of the NFL’s 2020 season, 10 starting quarterbacks were black – an all-time record.