The Washington Post’s religious reporter Michelle Boorstein seems to think that President Biden can be rabidly pro-abortion and still consider himself a devout Catholic, even when his Church is saying that’s not true. 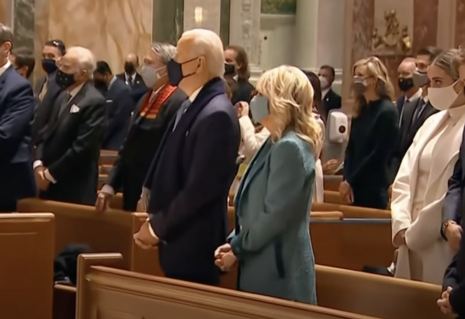 For our mendacious, Bezos-owned writer, the very people tasked with communicating the moral imperative of the Church on the issue of abortion can’t really offer much more than a second opinion that Biden can ignore. Instead of calling him what he is – an errant Catholic who shouldn’t be taking communion during Mass – Boorstein praised him as someone “who is passionately open about both his Catholic faith and his liberal politics on topics like reproductive freedom and LGBTQ equality.”

This particular piece was written in response to a statement made by the US Conference of Catholic Bishops on April 28, which said that they would vote this summer as to whether Catholic bishops or priests can deny Biden communion, due to his sin of promoting making pro-abortion policy. The Church teaches that a person in the state of mortal sin cannot receive communion, and the Church is clear that abortion meets this criteria of mortal sin. For Biden to be such an aggressive proponent of the baby-killing procedure means he is not disposed to receive the sacrament.

That’s Church teaching and bishops have every right (and even a duty) to deny Biden communion, for the sake of not allowing him to commit sacrilege – a greater sin – and for the sake of communicating to the rest of the faithful that you can’t flout a foundational Church teaching and still waltz up in the communion line as if you were Mother Teresa.

Of course, Boorstein considered that to be poppycock and insisted that despite what some in the USCCB think, Biden is a “president who attends Mass week after week and talks about his faith” and that “millions of American Catholics” love that. As if that negates him making it more possible to kill millions of unborn children every year and use their body parts for scientific research.

At most the reporter characterized Biden’s middle finger to his own Church’s moral authority as if it were merely a “conflict” between two different interpretations. In one corner you’ve got this Church-going “nice guy” who enables bad Catholics to feel comfortable in their failings, and in the other you’ve got “millions of people,” including some in the USCCB who see Catholic Biden as a “source of shame.”

Guess who Boorstein has got her money on: Yeah, baby-killing Biden. Her piece said the USCCB doesn’t even have the authority to deny Biden communion: “The USCCB is akin to an industry group of equals and has no authority over bishops themselves; only the Vatican does.” Ummm, OK, but the USCCB is merely communicating what the Vatican itself teaches.

It added, “Under canon law, Catholics are under the direction of their local bishop, and Catholic leaders in both D.C. and Delaware — Biden’s two hometowns these days — have already said they will not deny him Communion.” For WashPost’s purposes, this means that Biden is still in good standing. But in actuality, it just means that these bishops don’t want to rock the boat, or they’re bad Catholics who, like Joe, don’t care what their Church teaches. 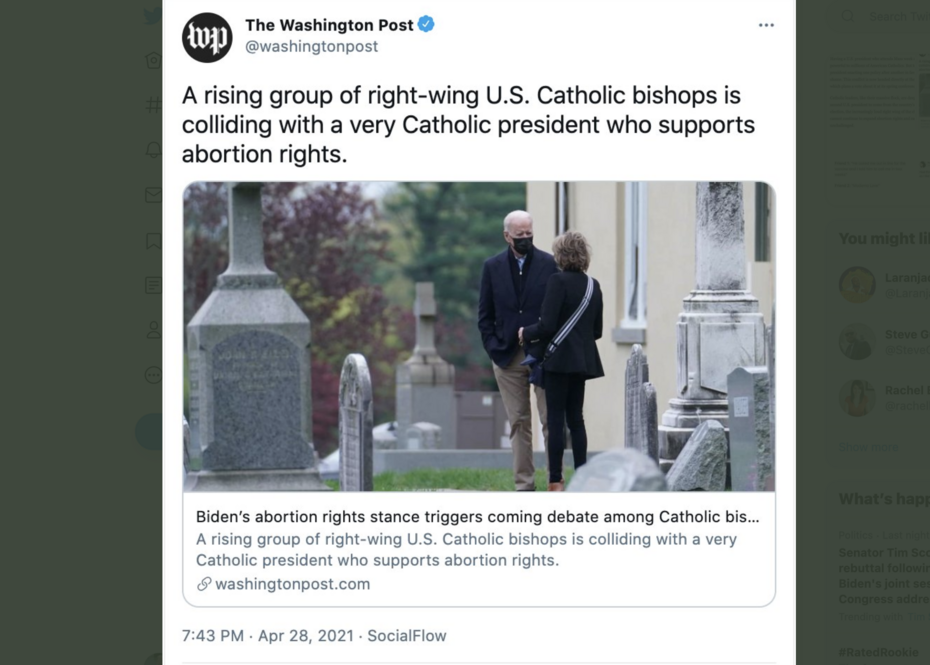 Boorstein was even more naked with her intentions in her Twitter caption for this piece: “A group of right-wing US Catholic Bishops is colliding with a very Catholic who supports abortion rights.” That’s insufferable. Biden is a bad Catholic who is going against Church teaching in general, not right wingers. Perhaps Boorstein could be more familiar with how the Church works. She is the “religion reporter” after all.