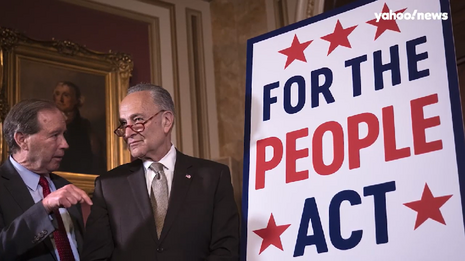 One of the downsides for liberal publications when they get a bit too comfortable with their audiences of a similar political persuasion is that they can accidentally let their guard down and reveal embarrassing truths. One such example could have been in Politico on Monday in which reporters Burgess Everett and Marianne Levine appeared to have inadvertently let the cat out of the bag in “Senate Dems agonize over voting rights strategy.”

The first couple of paragraphs cover how difficult it would be to pass the so-called “For The People Act” which, as we shall see, would be more accurately described as the “Elect Democrats Act.”

Senate Democrats made a major commitment to muscle through Speaker Nancy Pelosi’s ethics and voting reform bill. Yet many say they have no idea how to pass it and wonder what exactly the end game is for a signature Democratic priority.

Democrats are preparing to kick off sensitive internal debate over the issue this month as the Senate Rules Committee takes up the sprawling House package. But no Republicans support it, Sen. Joe Manchin (D-W.Va.) hasn’t signed on and at least a half-dozen Democrats have issues with the bill, according to senators and aides. That’s not to mention the constraints of the filibuster in a 50-50 Senate.

By the fourth paragraph Burgess and Levine slip and out comes the highly embarrassing revelation:

What’s at stake is not only the party’s promise on a key issue, but also potentially the future Democratic majorities. Many in the party privately worry that frontline Democrats, like Warnock or House Democrats vulnerable to redistricting, could lose their seats if Congress doesn’t send a federal election and ethics bill to President Joe Biden’s desk by this summer.

Much of the rest of the article continues listing the reasons why this bill will be hard to pass but perhaps at the top of the list should be the Politico revelation that a big purpose of the bill is to help elect more Democrats. Among those who might be especially enraged at the Politico revelation that might help sink the bill by being too truthful could be Ezra Klein who desperately, desperately wants to see passage of this bill:

At this point, progressives won’t accept defeat no matter how many trillions of dollars in spending the Democratic Party enacts with its slim Senate and House majorities.

“No amount of reconciliation success will excuse Democrats’ failure on this front and they will go down in history as the ‘peace in our time’ party of appeasers in an era of rising racist fascism,” said Ezra Levin, co-executive director of Indivisible, a progressive group.

As if Politico hadn’t done enough to poison the well for the Democrats on their attempt to pass the bill, we also got this reminder about federalizing state elections and overriding the laws passed by state legislatures on this topic:

The “For the People Act” would create some federally-mandated voting rules and require no-excuse mail voting and in-person early voting. It also establishes a public financing system. The more focused John Lewis bill would restore a requirement that certain jurisdictions receive approval from the Justice Department or D.C. District court before making changes to voting laws.

Exit question: Should the Senate Republican leadership send a thank you note to Politico for publishing an article that could make it even harder to pass the “Voting Rights” bill?