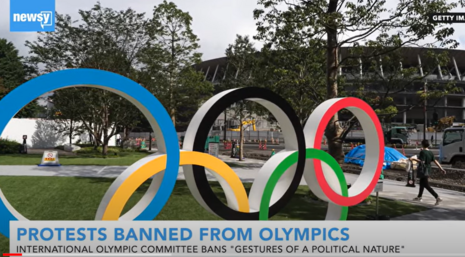 The International Olympic Committee gets it. People don’t want social justice nonsense in sports, and the IOC won’t tolerate displays like “Black Lives Matter” at the Summer Games in Tokyo beginning July 23.

Spoiled American athletes accustomed to prattling on about BLM and police brutality must adapt to performing in the social justice-free zone of the Olympics. Or pay the consequences.

The IOC affirmed it will enforce Rule 50, which bans political and social justice protests of any kind. Any defiance will be met with case-by-base repercussions.

The Associated Press reported that the IOC specifically banned apparel with the words “Black Lives Matter.” This phrase practically became the NBA’s brand in 2020. The AP reported:

“The International Olympic Committee got very granular with what is not allowed. It said specifically that the slogan ‘Black Lives Matter’ will be banned from athlete apparel at the Summer Olympics. It’s part of the IOC’s long-standing ban on ‘demonstration or political, religious or racial propaganda’ on the playing field, the medal stand or during the Games’ official ceremonies.”

This goes for non-athletes working at the Olympics, too.

Olympians will be allowed to display “more generic words,” like “peace,” “respect,” “solidarity,” “inclusion” and “equality,” AP reports. Anyone kneeling, raising a fist or otherwise will face the music – and it won’t be a national anthem tune.

The International Olympic Committee is already drawing resistance against its no-protest stance. If the IOC does punish an athlete, The World Players Association, an international union for athletes, promises to defend them.

“Any athlete sanctioned at the Tokyo Olympics will have the full backing of the World Players,” the union’s director told the AP. Global Athlete also vowed to provide cover for any SJWs who act up on the world stage. Its spokesman told athletes that it will “not allow outdated ‘sports rules’ to supersede your basic human rights”:

The IOC conducted a survey of 3,500 athletes and learned that 70 percent of them believe it is “not appropriate to demonstrate or express their views” at Olympic venues or the opening or closing ceremonies.

The ban on protest guidelines were developed to make the Olympics an enjoyable experience “without any divisive disruption.” Those words are music to our ears!

If only American sports leagues had the wisdom to adopt similar policy, fans may not be leaving them in droves.