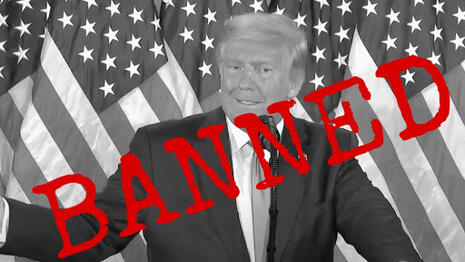 In a massive blow to free speech online, the Facebook Oversight Board decided to uphold the platform’s ban of former President Donald Trump. But with limits.

The Board “upheld” Facebook’s decision to ban Trump after more than three months of deliberation. The decision further solidified the Board’s role in strengthening Facebook’s censorship power. But it insisted that Facebook review the decision within six months.

The Board’s decision in this case clearly attempted to pander to both sides. It argued that the suspension was both fair and not fair:

“However, it was not appropriate for Facebook to impose the indeterminate and standardless penalty of indefinite suspension. Facebook’s normal penalties include removing the violating content, imposing a time-bound period of suspension, or permanently disabling the page and account.

“The Board insists that Facebook review this matter to determine and justify a proportionate response that is consistent with the rules that are applied to other users of its platform. Facebook must complete its review of this matter within six months of the date of this decision. The Board also made policy recommendations for Facebook to implement in developing clear, necessary, and proportionate policies that promote public safety and respect freedom of expression.”

Facebook decided to ban Trump following the Jan. 6 riot at the U.S. Capitol, after he called for “peace.” Facebook then turned the case over to the Board on Jan. 21. The ban was met with severe pushback from conservatives and even some liberals. Microsoft co-founder and billionaire philanthropist Bill Gates, for example, said that Trump “probably should be allowed back” on social media. Sen. Bernie Sanders (I-VT) even said that he did not “feel comfortable” with Trump’s removal from social media. Kate Ruane, the Senior Legislative Counsel of the far-left American Civil Liberties Union (ACLU), also reportedly expressed concern over Facebook and Twitter’s removal of individuals like Trump. French President Emmanuel Macron also spoke out against Trump’s censorship online.  Facebook said in a blog post that it will “carefully review” the Board’s recommendations.

The Board’s decision is disappointing but unsurprising, given that many of the Board’s members are radical leftists. One of the Board’s members, Chair of the Reuters Institute for the Study of Journalism Alan Rusbridger, reportedly argued that the “media should stop live broadcasting Trump, especially since he rejects robust challenges from reporters.” However, the few decisions that the Board has released have mostly, and surprisingly, supported free expression on the platform. The Board overturned Facebook’s censorship in four out of the first five cases it addressed. Since then, it has overturned the censorship in three out of the four other cases it has considered.