Former Secretary of State Hillary Clinton called to regulate Big Tech and censor more content in the name of saving “democracy” from the horror of free speech.

Clinton spoke about the need to overhaul Big Tech in an interview with The Guardian published May 6. Clinton explained her view that Big Tech companies “are so much more powerful than any organ of the so-called mainstream press.” She specified that there needed to be “not just an American reckoning but a global reckoning with the disinformation, with the monopolistic power and control, with the lack of accountability that the platforms currently enjoy.” 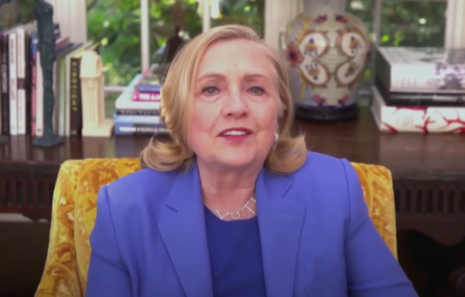 She singled out Facebook in particular, raking it over the coals:

“In particular Facebook, which has the worst track record for enabling mistruths, misinformation, extremism, conspiracy, for goodness’ sake, even genocide in Myanmar against the Rohingya. So governments are going to have to decide right now that the platforms have to be held to some kind of standard, and it’s tricky.”

Clinton tore into Big Tech platforms, declaring: “They’ve got to rid themselves of both-sidesism.”

She then ranted, “It is not the same to say something critical of somebody on the other side of the aisle and to instigate an attack on the Capitol and to vote against certifying the election. Those are not comparable, and it goes back to the problem of the press actually coming to grips with how out of bounds and dangerous the new political philosophy on the right happens to be.”

Clinton suggested that reining in Big Tech would “not [be] easily done.” She then lamented that more censorship would be needed: “They’re incredibly powerful. But I don’t see any alternative if we’re going to try to deal with the very real dangers that disinformation and the divisiveness it breeds pose to our democracies.”

Clinton also slammed former President Donald Trump for criticizing establishment news media. She suggested that “[i]t did do damage inside our own country, because it fed paranoia, conspiracy theories, partisan differences in our own political system that led many people to claim that the press was the enemy of the people, or at least the enemy of what they believed in.”