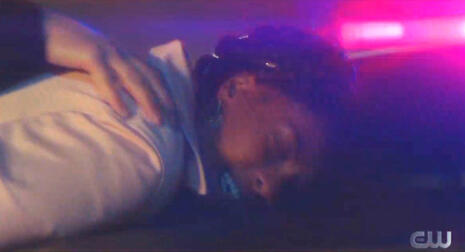 We’ve already seen Hollywood use fictional stories to paint the police as violent racists, but Wednesday’s episode of the CW’s Nancy Drew might take first place for the most over-the-top and racially divisive anti-police storyline. Not only were police vilified, but a few white suspects who aren’t officers were thrown in as evil participants who harassed an innocent black woman for good measure.

In the episode, “The Siege of the Unseen Specter,” Nancy (Kennedy McMann) is arrested for contempt of court and taken to the police station. While there, the doors suddenly lock, all computers and phones shut down, the windows are blackened, and there’s no way out of the building. A voice from an “arbiter” comes over a speaker and tells Nancy and everyone present that they must solve the case of a young, black woman by the name of Dolores Barrett who went missing in 2013.

Nancy wonders why she never heard of the case, but soon the implication is made that the reason is that a young, white girl went missing the same week:

Fraser: She’s a missing persons case Hampton and I worked back in 2013.

Nancy: You were a policeman?

Fraser: This is the case that made me leave the force, run for town council.

Tamura: Hampton, pull the file. We should have the hard copy somewhere. Dolores was from… From Portland. Last seen here in Horseshoe Bay. She, uh, had dinner at the Blue Iris Bar & Grill, and then she vanished. Her mother reported her missing. Four months later, Dolores’s empty car was found, smashed at the bottom of a ravine.

Nancy: No body? No signs of foul play?

Fraser: Wild animals likely made off with her remains. The coroner ruled an accidental death.

Nancy: Why isn’t this ringing any bells for me? A missing woman in Horseshoe Bay– that’s front-page news. Rose Turnbull went missing the exact same week.

Nick: The girl you found behind a hidden staircase in that warehouse? You were in the newspaper for that. So, Rose got all the attention, and Dolores fell by the wayside?

Fraser: Our resources were stretched too thin for both searches. I hated that, so I went into policy.

When the current detective in charge, Tamura, asks Nancy’s former flame Nick (Tunji Kasim) a question unrelated to the case, Nick says disdainfully, “Maybe get back to wondering about the missing black woman who’s been ignored for the last six years.” Tumara replies, “You’re supposing I’m not?” Nick adds, “I’m suggesting that crimes against black women are underreported, under-investigated, and under-solved. So maybe if Dolores had been white, more people would have been asking about her. Maybe they could have found her. Maybe even saved her.”

Conveniently, every suspect involved in the case just happens to be at the police station. And they also happen to be white. Brandon is a man who was officially reported as the last person to see Dolores alive. He claims Dolores was drunk when he happened to see her leave the restaurant she was last seen at, but this ends up being proven false. Brandon was actually on a date with Dolores, they had a lovers’ quarrel outside of the restaurant and he grabbed Dolores’ arm as she tried to leave. He’s also married and didn’t want his wife to find out about the date.

Nick finds proof that Dolores never drank in her life so we can chalk Brandon up to being a bad white guy, if not a killer. Former Officer Fraser (who was on duty during the case), current Officer Hampton, and a local mom named Mitzi are the next bad white suspects as the story unfolds:

Fraser: Dispatch got a call from Mitzi about a black woman driving erratically. She said Dolores had a ton of cash and that she was probably a drug dealer.

Fraser: So, when I pulled Dolores over, and I saw that wasn’t the case, I let her go. I didn’t mention it earlier because I didn’t want to out Mitzi for… for obvious racism.

Mitzi: What?! I am… I am not a racist! Uh… It’s the police. The police– they did something to that girl. ‘Cause why else would Hampton have threatened me earlier tonight? Yeah, she told me that if I said I called the cops on Dolores, that it would get out that I weaponized the police against a black person. And then, it would be all over the Internet, and that people– they would come after my kids, and I’m so sorry, but I’m a mom.

Hampton: You must have misunderstood me.

Nick discovers that Hampton was on guard duty the night Dolores went missing, and as the pressure mounts, he begs her to tell the truth, which she does:

Hampton: Fraser brought her in that way.

Fraser: Not another word, Hampton.

Hampton: He said if I didn’t cover for him, he’d make sure I never got back-up again.

Fraser: I wanted to call the doctor, but Fraser said, “No. They all do that. They all call for their mothers.” Then Dolores had a seizure! She was bleeding inside of her head. She died in front of us. We panicked. We threw her car in the ravine and… Her body in the ocean.

Hampton: I kept the dashcam footage from that night. Even though you told me not to. You hit her head against the car right after you handcuffed her. The video shows it all.

Fraser: It was an accident! She was resisting! She pulled away.

Nick: Probably because she was terrified. Because we are always terrified.

Nancy: Brandon, you harassed her. Mitzi, you humiliated her. Are you listening to me? Fraser, you pulled her over without probable cause, and you terrified and assaulted her. Hampton, you left her to die a slow and painful death alone as she cried out for help in a holding cell. And then you covered up her murder, and you threw her body in the ocean.

The line, “They all cry for their mothers,” was an obvious reference to the George Floyd case, which was an outrage to most everyone and resulted in a guilty verdict for the officer. And, of course, they inserted Fraser’s desperate claim that Dolores was resisting arrest into the dialogue when it’s clear that Fraser was just an evil racist who took his hate out on an innocent black person.

The liberal lecture being that we can then assume the same is true for any officer in real life who ends up having to use deadly force on suspects who resist arrest. When in fact, most officers face a life-and-death split-second decision while doing their best to protect their community, and it has nothing to do with race whatsoever.

But as long as Hollywood and the left keep pushing these false narratives and make-believe stories, it’s only going to create further fear, division, and hate – the very things the left claims to be fighting against.

Conservatives Fight Back! This episode was sponsored by AT&T, TurboTax, and DoorDash. Click each advertiser for their contact information so that you can let them know how you feel about this episode!