The Biden administration signaled its intent to join an international agreement to stop “violent” extremism online. 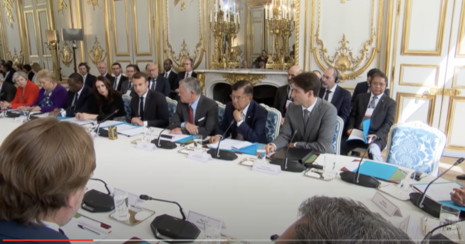 The controversial agreement is named after the New Zealand city where a far-right gunman murdered 51 people in a mosque in 2019 while live-streaming the massacre on Facebook.

The State Department released its own statement, saying that the opportunity to sign the agreement was “welcome.”

“We welcome the important momentum that the Christchurch Call has generated and look forward to continuing our work with government, technology sector partners, civil society, and other stakeholders to prevent terrorists and violent extremists from exploiting the Internet while protecting its openness, interoperability, reliability, and security.”

This news comes after the Biden administration announced that it would seek “outside firms” to monitor online extremism. A recent government bulletin also revealed that the United States Postal Service was quietly monitoring Americans’ social media posts.

President Trump refused to support it, citing concerns that the agreement would inhibit free speech.

”We continue to be proactive in our efforts to counter terrorist content online while also continuing to respect freedom of expression and freedom of the press,” the Trump administration said at the time. “Further, we maintain that the best tool to defeat terrorist speech is productive speech, and thus we emphasize the importance of promoting credible, alternative narratives as the primary means by which we can defeat terrorist messaging.”

James Grimmelmann, a Cornell Tech law professor, said at the time that it was “probably for the best” that the United States didn’t sign the agreement.

“The government should not be in the business of ‘encouraging’ platforms to do more than they legally are required to — or than they could be required to under the First Amendment,” he said.

The agreement is notably supported by Facebook, Twitter, Amazon, and YouTube. More than 50 nations — from New Zealand to France — have signed on. Ten “online service providers’ signed it, as well.

Psaki noted the concerns, claiming that free speech protection remains a priority for the administration.

“The United States applauds language in the Christchurch Call emphasizing the importance of respecting human rights and the rule of law, including the protection of freedom of expression,” she said in a press release.

“In joining the Christchurch Call, the United States will not take steps that would violate the freedoms of speech and association protected by the First Amendment to the US Constitution, nor violate reasonable expectations of privacy.”

Psaki concluded by saying the White House will participate in a virtual summit centered on the agreement on May 14th.

If you have been censored, contact us at the Media Research Center contact form, and help us hold Big Tech accountable.