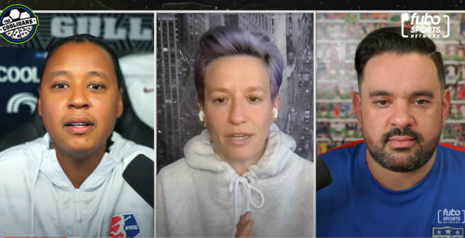 Megan Rapinoe has taken women’s athletics 180 degrees in the wrong direction from the polite, wholesome Chris Evert Lloyd-type athlete of yesteryear. She’s done this by speaking social justice truth to power. Demonstrating a level of hubris putting LeBron James to shame, this everywoman says she just might be president one day.

There are so many people Rapinoe has spoken this truth to. So many more she can enlighten with her left-wing politics, she says. It’s all available for consumption on the Fubo Sports Network Youtube interview she did with Cooligans show hosts Alexis Guerreros and Christian Polanco Sunday.

For starters, Rapinoe recently graced the White House and delivered her message to President Joe Biden. She volunteered last year to bring her narcissism to his administration as vice president, but he passed on that golden opportunity. He’s really cool, though, and he’s got her back.

Rapinoe re-told the story of how, during the World Cup soccer tournament in 2019, she spoke truth to power to former President Donald Trump, “a horrible person.” She picked a fight with the past president, blamed him for the ensuing acrimony and shut him down.:

“He was a person attacking a woman, a gay woman, who’s got pink hair. … You saw him unravel. … It just felt like I was every woman in the moment. … It felt like an attack on anyone who speaks truth to power, and our (USA National) team totally took it in stride. … It totally backfired (for him) and made me so much more popular than I would have been. …”

Aside from Trump, politicians are talented, and Rapinoe says she probably could be a representative of some kind, “win a district here or there.” Or maybe she’ll just talk about the politics of actual congressmen. “Unless it’s the president, and then probably, I’ll just do it.”

The Cooligans wanted to know what more Rapinoe still plans to do, since she’s accomplished so much already. Here’s a hubris alert.

Little girls wanted to see someone with wild hair, who’s gay, scoring goals, Rapinoe bragged. Even though nobody can control when the f-bombs “just slip out sometimes. When I talk a lot of people listen.” She continues to speak truth to power in a way that doesn’t alienate people. People are going to hear her radical social justice message when they watch the NBA, too, she says. The few people that are still paying any attention to that irrelevant league.

Here’s a real laugh. Not only does Rapinoe get her social justice message across to young, impressionable girls. She also wants to get it across to their straight dads, too.

How did we ever make it through life before Rapinoe brought her far Left brand of politics to the world stage? She says she loves talking politics from her lane, but it’s a lane we can do without.