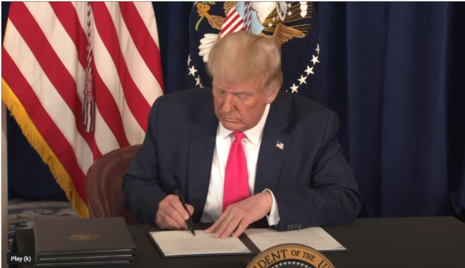 Nearly all major social media platforms banned former President Donald Trump in January after he called for “peace” following the Capitol riot. A new study from the Pew Research Center revealed just how controversial the bans were to the American people.

Pew conducted the study from April 12 to April 18, prior to the date that the Facebook Oversight Board decided to at least temporarily uphold the suspension of Trump.

The study noted that 88 percent of respondents who identified as “Republican” or “Republican-leaning independents” did not agree with the barring of Trump from social media. Ninety-five percent of conservative Republicans also disagreed with a permanent ban, as did 77 percent of moderate and liberal Republicans.

The survey respondents on the left who expressed concern about a permanent Trump ban were not alone. Microsoft co-founder and billionaire philanthropist Bill Gates, for example, said that Trump “probably should be allowed back on” social media. Sen. Bernie Sanders (I-VT) even said that he did not “feel comfortable” with Trump’s removal from social media platforms. Kate Ruane, the Senior Legislative Counsel of the far-left American Civil Liberties Union (ACLU), also reportedly expressed concern over Facebook and Twitter’s removal of individuals like Trump.