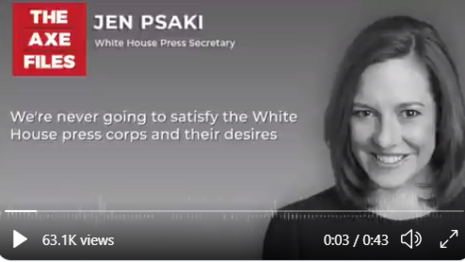 White House press secretary Jen Psaki admitted to her old Obama administration colleague David Axelrod on his CNN podcast The Axe Files that the White House staff tries to tell President Biden not to take questions from reporters. It’s like he has to be caged to prevent his gaffe-prone mouth from going “off message.” They try to stick to canned speeches and pre-chewed social-media messages.

Axelrod seemed impressed. “It seems to me that you guys have done a good job of managing that, because a lot of his interactions are speeches and settings in which you have a pretty good sense going in what he’s going to say.”

Psaki replied “I think the thing that’s interesting is that he actually takes questions – I mean he took questions, I mean he did a mini press conference yesterday. He takes questions nearly every day he’s out from the press. That is not something we recommend, in fact, a lot of times we say, ‘Don’t take questions.”

Media reporter Joe Concha “For giggles, picture former White House press secretary Kayleigh McEnany saying it’s “not something we recommend” regarding President Trump taking impromptu questions from reporters, which he did more often than any of his predecessors by a country mile. Then imagine the reaction of, say, Jim Acosta or any other journalist upon hearing it. Smelling salts and/or a defibrillator come to mind.”

Concha added that an extensive study by the nonpartisan Pew Research Center found that two-thirds of media coverage of Biden has focused on his policy agenda, while nearly three-quarters of Trump coverage in his first 100 days focused on … Trump himself, specifically framed around his ability to lead. Biden’s positive coverage is also double that of Trump, with Biden receiving just 32 percent negative coverage.

Psaki also promised they’re not going to have regular press conferences. They’ve had only one in the first 110 days. She says the press always wants more. But if Team Biden really feared their anger, they wouldn’t stiff-arm them for months at a time.

On a new #AxeFiles, WH @PressSec Jen Psaki speaks candidly about the daily tug-and-pull with the media and the administration’s determination to avoid getting knocked off message. “We’re never going to satisfy the White House press corps.” pic.twitter.com/v6sFyiD5sw