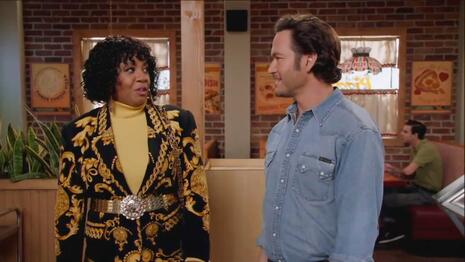 Just when you thought a heavily racial show (ABC’s mixed-ish) that loves to turn racism against white people into humor couldn’t sink any lower, you end up with Tuesday’s episode, “Walk This Way,” in which main character Paul (Mark-Paul Gosselaar) pathetically uses his “white privilege” in a desperate attempt to make his racist black sister-in-law Denise (Christina Anthony) like him. (If you remember, Denise is the one who loves “disappointing white people.”)

At the start of the episode, we see a montage of all the ways Paul has tried to please Denise over the years and how much Denise disdains him. “I’m sorry, but he does not have the right ‘pigmentation situation,’” she proclaims. But when she finds out that he isn’t given a hard time when he returns items to the store, even “slightly used, open underpants,” because of his white privilege, Paul offers to help her with a return. “Looks like Master Alabaster and I are finally gonna hang out,” Denise quips. Haha?

When Paul gets a taste of Denise’s approval, he becomes desperate for more and offers to use his privilege to help her with other things, telling her that society reinforces his entitlement:

Paul: I — I can do more than just return things without receipts.

Paul: Have you ever used a bathroom at a restaurant that you were not eating at?

Denise: Of course not.

Paul: Look, society reinforces my entitlement, and I use it all the time to help Alicia. So let me help you out. I am conditioned to believe that the world is my oyster, so why not take the pearl?

Denise: That’s not a saying, but I’m scooping up what you’re slapping down.

Paul: Also, not a saying.

Denise: Can you help me use some expired coupons?

Denise: What about going to a hotel pool without being a guest?

Paul: Well, if the pool is empty, who’s it hurting?

Denise: What if I wanted to mouth off to a cop, then punch his police horse?

Denise: Okay, that was a test. You passed. I would never hurt a horse. They’re nature’s statues.

Paul then treats Denise to everything his white privilege allows, but she continues to treat him with disdain:

Bow: While we were about to learn the value of honest work, my dad and Aunt Denise were doing almost the exact opposite.

Denise: Excuse me. I’d like to try these on. Paul, you up.

Paul: No problem. Excuse me… My good friend here would like to try these shoes on.

Salesman: Of course. Sorry about that. Uh, what size?

Paul: And I’d like those complimentary try-on socks in each of those sizes, too.

Salesman: You got it.

Denise: I got it.

Paul: You got it. Hello, Mastercard? I’m going to need you to remove this international fee from Denise’s bill. He’s saying you were in Mexico.

Denise: I was in Cancún. I wasn’t in real Mexico.

Paul: This is simply unacceptable. Thank you very much.

Paul: See, walk in with me, and they think you’re a member.

Denise: Does that mean you can get us piña coladas?

Paul: Oh, sure thing, Double D’s. Nope. I just — I’m really struggling with a nickname for you. It’s because your name is Dee-Dee. This is fun, right? We’re having fun.

Denise: Yeah. But you’re gonna get me some nachos. Right after I do this cannonball.

Bow: Despite this being the most fun day my dad had ever spent with my aunt…

Denise: Get me some extra jalapeños!

Bow: He couldn’t help the nagging feeling that he was being used.

Denise: Paul, get in line. Go get those drinks.

Paul tries to keep the fun going over lunch despite his misgivings, but without any privilege involved, they find they don’t have anything to talk about as they eat in awkward silence. Denise is usually lively and talkative, unless she has no use for being around a white man, apparently.

Denise does end up sharing that she’s having problems with the electricity in her apartment and can’t get the landlord to do anything about it. Paul brags that he can help with that, too. “Look, Denise,” he says, “there is nothing a confident white man can’t do. Let’s use racism to our advantage and bring Master Alabaster out of retirement for one last score.”

But Paul’s efforts end up falling short and he gets Denise evicted instead. When she moves in with him and her sister Alicia (Tika Sumpter), Paul has a heart-to-heart conversation with her, telling her that she’s one of the most important people to all the people he loves and that he’d hoped that the family he married into would become his family. “But it just feels like there’s been more barriers because of who we are,” he says.

Yes, Paul, you’re right. You’re a white man and Denise is a racist. Denise replies, “Well, it’s true — as a matter of taste, I don’t associate with white men who wear sandals,” but she does end up softening up to him a bit. Lucky, Paul! /sarcasm

In the end, Alicia’s lawyer privilege trumps Paul’s white privilege. She threatens Denise’s landlord with a made-up law and he caves, giving Denise her apartment back. Alicia is black and female, so I’m not sure what the overall lesson is supposed to be. Then again, you can’t make sense out of liberal logic.

Conservatives Fight Back! This episode was sponsored by State Farm and Old Navy. Click each advertiser for their contact information so that you can let them know how you feel about this episode!