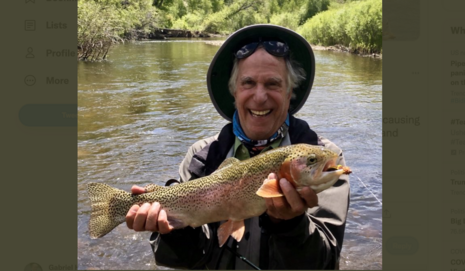 The woke mind virus – that infernal plague which eventually processes every action that man does as an affront to social justice gods – encouraged just about the most ridiculous Twitter mob condemnation yet. Self-righteous Twitter users picked up their torches and pitchforks and marched on the former Happy Days actor’s photo holding the fish he caught.

All poor Mr. Winkler had to do was not take pleasure in his murder spree, or at the very least not post it to Twitter. On May 10, the actor posted a photo of him out the water holding his latest catch. He captioned the trophy photo, saying, “I can’t even express the beauty everywhere on our planet.”

I can’t even express the beauty everywhere on our planet pic.twitter.com/K0uzx6gfiN

But many accounts immediately slammed Winkler for tweeting such a sentimental quote alongside such a barbaric image. One user tweeted, “I hope you put that beautiful fish back in the beautiful water to continue to live a beautiful peaceful life.” Oh man, nothing is sacred anymore. Not even a much needed, relaxing fishing trip.

Another tweeted, “Do you have any idea how much pain this pic is causing that poor fish? People who pose with their kills and catches are weird.” Right, Winkler fishing is now eliciting the same reaction from people as big game hunters in Africa tend to.

Another person, a self-proclaimed Vegan (is there any other kind?), slammed Winkler for “Animal cruelty.” She wrote, “Oh, look at the grown man tormenting an animal for the fun of it. Now you’ll double down with some nonsense about them not feeling pain, or being able to live with torn mouths. #animalcruelty.” Lady, if we are really going to be that extreme about this whole thing, we might as well berate Winkler for accidentally stepping on bugs or destroying any plant life on his hike out to the water.

Oh, look at the grown man tormenting an animal for the fun of it. Now you’ll double down with some nonsense about them not feeling pain, or being able to live with torn mouths. #animalcruelty

To think, he risked countless lives just to have a pleasure outing. AND HE TOOK PHOTOS SMILING WHILE DOING IT!

Some crazy posters tried a more moderate rebuke of Winkler, saying, “I have no problem with killing and eating. The odd bit is posting a picture of an animal you’ve just killed and talking about ‘the beauty of nature’.” Ah, we see. Perhaps the actor should have adopted the Native American approach to fishing, whereby one prays for a bountiful catch, and wastes nothing of the fish. Enough with the pleasure fishing, white man. Your dominion over nature must stop. The earth must heal.

Nobody tell them that Winkler was present for the birth of one of the most horrifying animal cruelty ideas of all time: feeding mayo to the tuna fish!