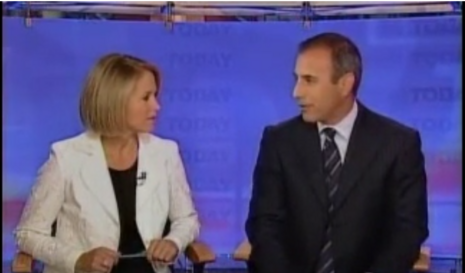 If the media wanted to slam President Joe Biden for the jump in gas prices (that spiked due to a hacking of Colonial Pipeline) they have ample reasons to criticize him. They could highlight everything from the Biden’s “baffling” response to his anti-fossil fuel policies and decision to kill the Keystone XL pipeline.

Back in 2005 and 2006 liberal network and cable journalists hiked up their attacks on President George W. Bush and Big Oil “greed” for an increase in gas prices. It got so silly even multimillionaire anchors like former Today co-host Katie Couric spouted absurdities like: “I had to take out a loan to fill up my minivan. It’s crazy.” Then-NBC Nightly News anchor Brian Williams blurted that consumers “needed to refinance” their “homes” to refill the gas tank.

To remind NewsBusters readers just how tough the current media climate COULD BE on Biden we offer the following look at the most absurd outbursts of gas price hype from 2005-2006:

He Must Have a Really Huge Tank

“The pumps were quickly shut down amid fears that oil company profits might plummet. But for one brief, shining moment, we the consumers won. It was like the old days, before you needed to refinance your home to refill your tank.”
— NBC’s Brian Williams, who makes an estimated $4 million a year, concluding an August 22, 2006 Nightly News story about an Illinois gas station whose computers accidentally set gas prices at 30 cents per gallon instead of $3.09.

“I’m a little peeved when I hear the President say there’s not much we can do about this [gas prices], folks….Where is his responsibility in all this? Five and a half years, and we’re dealing with these gas prices? It’s ridiculous.”
— ABC’s Meredith Vieira on The View, April 26, 2006.

“Across the nation, gas prices went to record highs today….Will it get to the point that only the privileged can afford gas?”
— John Blackstone on the CBS Evening News, August 11, 2005.

Enough of this Free Market Crap

“What can you, and what can the President do, to help people, because the prices are clearly spiraling out of control?…What about a national price cap? There are some people who say, gas is going to cost us $3 a gallon, the average will be $3 a gallon by the end of the week – by next week. What about a national price cap?”
— CNN’s Soledad O’Brien to Secretary of Energy Samuel Bodman on American Morning, August 31, 2005.

“Today they sent him [President Bush] to the Chevron refinery in Pascagoula, Mississippi, as if reminding everybody of his oil connections and the government’s oil connections was not among the worst things he could do right now. Where did the political sharpshooters in this administration go?”
— MSNBC’s Keith Olbermann to Chris Matthews on the September 15, 2005 Countdown about 10 minutes before the President’s speech in New Orleans.

The Media’s War Against Big Oil

“As Americans struggle to keep up with high gas prices, oil companies are reporting record earnings. Is this a case of corporate greed out of control?”
— Co-host Rene Syler on CBS’s The Early Show, April 27, 2006.

“Arlen Specter says Congress should consider taxing the windfall profits being reaped by the oil companies, which I think is a no-brainer. These guys aren’t entrepreneurs – they are pirates.”
— Geraldo Rivera on Fox’s Geraldo at Large, April 24, 2006.