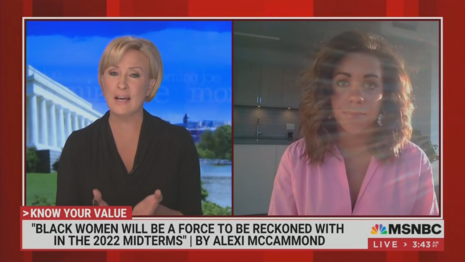 Morning Joe gave a textbook example today of how the liberal media can rehabilitate one of its own who has, to borrow a British expression, blotted her copybook. The journalist being rehabilitated was 27-year-old Alexi McCammond, who was fiercely denounced as a racist after she was appointed editor-in-chief of Teen Vogue, which is an infamous radical-left site. Activists resurfaced anti-Asian tweets from 2011 — when McCammond was 17 — and she was forced out before she even started.

Mika Brzezinski strangely tried to rehabilitate McCammond without the slightest fraction of specifics about what she had said — thoughtless teenager tweets about “swollen Asian eyes” and a “stupid Asian TA.”

Instead of revealing those facts, Mika made vague and obscure references to the show having devoted a past segment to Alexi, and “to cancel culture and forgiveness.” Rather than revealing the truth, Mika told viewers they could see that previous segment about McCammond “on our website, Joe.MSNBC.com.” I went there, and you can’t find it easily. Just Google it. Mediaite had a version. Kurt Bardella came rushing to the victim’s defense.

Mika nudged: “Alexi, since you weren’t there, we were talking about you. Before you get into your new article, would you like to say anything?” McCammond expressed “the last few weeks have been really painful, to be sure, not just for me, but for many folks in the AAPI community and others who were hurt by all of this.” Uninformed viewers might have been deceived into thinking that Alexi was the one forgiving others for their transgressions!

Brzezinski touted McCammond’s new article on black women running for office at “KnowYourValue.com.” But another thing that Mika “forgot” to mention is that the founder of Know Your Value is none other than . . . Mika Brzezinski! It’s based at NBCNews.com. In other words, inviting McCammond to write an article and subsequently appear on Morning Joe to discuss it was all part of Mika’s two-part plan to rehabilitate a fellow female member of the liberal media.

The McCammond article is a typical exercise in hailing the ascent of black women in politics, and treating it almost entirely as a Democratic Party thing. The article has two little paragraphs on Republicans like Mia Love, and the rest is celebrating the Kamalas of the world who “geek out” over the Green New Deal. The segment opened with a clip of Tishaura Jones, the newly-elected mayor of St. Louis, saying she wants her city to “welcome” people who should “be able to succeed here,” regardless of a variety of things, including “your documentation status.”

Morning Joe hiding the facts about Alexi McCammond in a campaign to rehabilitate her was sponsored in part by Uber.

MIKA BRZEZINSKI: That was Tishaura Jones, the first black female mayor of St. Louis giving her victory speech last month. Joining us now, writer and reporter, Alexi McCammond, here to talk about the rising number of black female candidates in politics. She has a new piece for knowyourvalue.com entitled, “Black women will be a force to be reckoned with in the 2022 midterm elections.”

Alexi, it’s great to have you back on Morning Joe. And for our viewers, you may have heard of Alexi and her story, because we talked about her, right here on Morning Joe. It was a very lengthy segment about cancel culture and forgiveness. And if you missed it, you can see that on our website at Joe.MSNBC.com. And Alexi, since you weren’t there, we were talking about you. Before you get into your new article, would you like to say anything?

ALEXI MCCAMMOND: Well first, Mika, thank you so, so much for having me on this morning. It’s so good to see you, even though we’re not together in person. And I appreciate you even asking that question.

I mean, the last few weeks have been really painful, to be sure, not just for me, but for many folks in the AAPI community and others who were hurt by all of this. And I totally understand that. And I’m just really grateful to have the opportunity to be reporting again on the issues that I care about, to really try to lift up minority voices and the voices of folks from marginalized communities who might not get the coverage that they deserve otherwise.

MIKA:  By the way, I appreciate your words. It’s a dialectical, which is something we’re talking a lot about on the show this week with a book we’re talking about: “DBT for Dummies.” That’s later on in the show. But the dialectical here is you can have regrets and at the same time you also can have a lot to offer. And this piece is terrific.