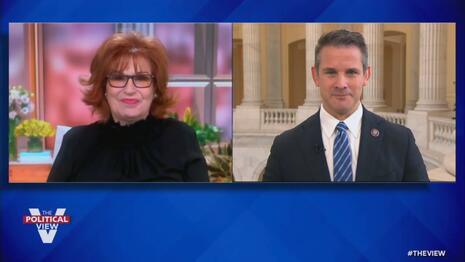 The media loves Republicans who act like GOP infighting is the biggest problem the country is facing right now.

Illinois Rep. Adam Kinzinger has been making the media rounds defending Wyoming Republican Liz Cheney and attacking pro-Trump Republicans this week, and stopped by ABC’s The View on Friday to do the same. While there, the liberal hosts showered him with praise for helping them to bash his own party and therefore, distract from President Biden’s failures.

“Here to give us his take on this morning’s vote, the entire Cheney controversy and the future of the GOP itself,  is the voice of reason—one of the voices of reason in the Republican Party, Illinois Congressman Adam Kinzinger,” she praised.

After Kinzinger complained about the lack of leadership in the GOP, Friday co-host, former Biden surrogate and CNN Republican Ana Navarro also laid it on thick:

Dear, Adam, um before I ask you anything, as a lifelong Republican I just want to say, thank you. Thank you for being a voice of reason, thank you for having principles and guts and convictions and putting truth before anything and country over anything. Thank you.

“[Y]ou even said it was like the Titanic going down. So what can we do to save it? And does it make you question your own future in it when you see people punished for telling the truth?” she asked, before making her own overwrought analogy: “What does this mean? Does it mean they are literally going to bloodlet every person who doesn’t bend the knee, out?”

Later on, the co-hosts continued inviting him to attack members of his own party. Sunny Hostin asked if Rep. Marjorie Taylor Greene should be investigated by the ethics committee, and right after this Joy Behar asked if Republican Matt Gaetz should step down amidst being associated with a sex trafficking investigation. Hostin followed up by asking the congressman to bash a fellow GOP congressman for downplaying the Jan. 6 riot. Kinzinger accused his colleague of sounding like a North Korean propagandist.

But there was no Democrat bashing. No one asked Kinzinger’s opinion on members of the Squad actively supporting terrorist group Hamas, for instance.

In fact, there was only one question centered on President Biden. Despite having fiery words attacking his own party members, Kinzinger was less enthusiastic criticizing Biden. With her second question, McCain asked about the East Coast gas shortage crisis and if there was more the Biden administration could be doing. Kinzinger figuratively shrugged his shoulders: “Well, look, sure anybody can always do more,” he said, calling the task force a “good start.”

He stressed the importance of infrastructure and cybersecurity briefly after this without any criticism of the Biden administration. But that’s exactly why he wasn’t grilled like every other Republican guest, right?

Cheerios and Humana sponsor The View, contact them at the Conservatives Fight Back page here.

JOY BEHAR: Here to give us his take on this morning’s vote, the entire Cheney controversy and the future of the GOP itself,  is the voice of reason—one of the voices of reason in the Republican party, Illinois congressman Adam Kinzinger. Welcome to the show Representative Kinzinger. So happy to have you here.

KINZINGER: You bet, thank you.

BEHAR: So you’ve been a vocal supporter of Liz Cheney who refused to accept the big lie that the election was stolen. Now your former house Republicans have voted in Stefanik as her replacement. Do you agree that Trump is the leader of the Republican party first of all, and the GOP is actually united behind him? Is that a fact?

KINZINGER: So I guess I agree he’s the leader because there’s an absence of leaders right now….

ANA NAVARRO: Dear, Adam, um before I ask you anything, as a lifelong Republican I just want to say, thank you. Thank you for being a voice of reason, thank you for having principles and guts and convictions and putting truth before anything and country over anything. Thank you.

NAVARRO: The question is though, kicking out Liz Cheney was the GOP’s transparent attempt to align with Trump in hopes of winning back the house in 2022, but it’s given her a massive platform and now she’s making the media rounds, including on Fox News yesterday. Today she’s on CNN insisting the election was not stolen. Could her removal backfire, especially with Republican women because of the way she was ousted?

KINZINGER: I certainly believe that. I believe that by basically deplatforming Liz they’ve actually given her a massive platform. She would tell the truth obviously when asked about it. But as conference chair, she took in the whole needs of the conference. Now she’s out there independently saying what needs to be said, finding whatever media outlet she wants to go on, and uh,  I think telling the truth. I think they actually created their worst enemy in creating her in deplatforming her. I’ll say this too, people look to us for honesty, right? People look to us for answers. When we go back to the past and go with a loser president that lost and lost the house and Senate, that’s not providing people you know any kind of a path to the future. Standing up and being sane in the Republican party, which I appreciate you saying at the beginning, that’s not anything heroic. That’s just what people expect of us. Unfortunately there’s not many of us doing that at the moment.

MEGHAN MCCAIN: Congressman Kinzinger after Cheney was booted from her position, congresswoman Lauren boebert tweeted Liz Cheney is the GOP of the past. We are not going back. The Republican party obviously was a big tent party, with plenty of room to disagree and room for people like Liz Cheney and you and me and people like Lauren Boebert to stay together. Now it just keeps getting smaller and smaller and you even said it was like the Titanic going down. So what can we do to save it? And does it make you question your own future in it when you see people punished for telling the truth? On a personal note, I’ve taken this very personally, I think because there seems to be specific aggression about the fact that Liz Cheney is Dick Cheney’s daughter and that she’s a legacy Republican. What do you think this means? Does it mean that they are literally going to bloodlet every person who doesn’t bend the knee, out?

SUNNY HOSTIN: Congressman, the GOP is now attempting to rewrite history when it comes to the insurrection at the capitol on January 6th. Congressman Andrew Clyde of Georgia said to call it an insurrection is a bold-faced lie and that it looked more like a, quote, normal tourist visit. We’ve all seen saw what happened with our own eyes. This week Body camera footage was released showing officer Michael Fanone being attacked by rioters. What was your reaction to that particular video and your colleagues just lying about what happened that day?

KINZINGER:  When I saw my colleagues speak, it feels like it’s the “1984” novel or something you see out of North Korea where its like we’re just going to state whatever we want the reality to be.  I was there on January 6th. This was a real insurrection. This was people who thought they were doing Trump’s bidding at the behest of Trump, not just on that day, but days leading up to that with the narrative of a stolen election. I’ve become good friends with Mike Fanone, the officer who’s bodycam you’re showing. I’ll tell ya, he’s a man very disheartened now not because of his job and what he went through, but because the party that claims they support law enforcement is ignoring him. As far as I know, he’s asked Kevin McCarthy to talk to him. Kevin has yet to respond to that. Why? What are you afraid of? January 6th was real. As a party, we have to take ownership of that, recognize what led to that so we don’t do it again. This wasn’t ten years ago. This was four months ago. The idea of let’s move on, I agree let’s move on after we take a full accounting and figure out how we got here and how never to get to this position again.

JOY BEHAR: Okay. Thank you. I would like to thank you for being on today and for also fighting the good fight. We appreciate it. You have many people behind you. Many people agree with you and hope you win this battle.