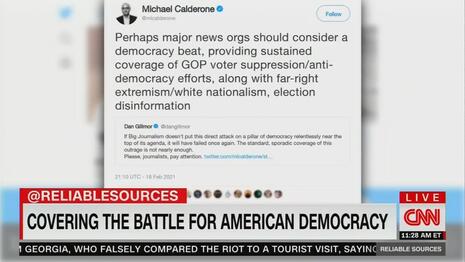 On Sunday’s Reliable Sources, host Brian Stelter insisted the news business really needed a “democracy beat.” As if reporters don’t cover elections? No, he means reporters need to focus harder on how Republicans hate democracy and want to destroy it. The “objective media” sure knows how to create organizing principles. As usual, liberals insist Democrats equal democracy.

Stelter explained how all the leftists from Daniel Froomkin to Michael Calderone think it’s time for a “GOP voter suppression/anti-democracy” beat:

STELTER: From the former president’s big lie blog posts to a fishy audit in Arizona, last year’s U.S. election is still being screamed about. The GOP is erecting new barriers to voting in some states, and the newly ousted Liz Cheney is calling out her party for caving in to liars. She says Donald Trump is very much willing to unravel the U.S. democracy to get back to power someday.

And all of this news, all of it, has stoked partisan squabbling, but all of it is bigger than partisan politics. It’s really about the future of America’s democracy. That’s why newsrooms need a democracy beat.

One might admire the shamelessness of putting yourself above “partisan squabbling” as you claim very much like a partisan that the Republicans are an authoritarian threat.

Stelter brought on reliably leftist sources to confirm his argument: Mother Jones reporter Ari Berman, who has specialized in “voter suppression” journalism, and Michigan Secretary of State Jocelyn Benson, an “elected Democrat.” Benson has also been a journalist, Stelter mentioned, but he didn’t elaborate: she worked as a legal assistant to Nina Totenberg at NPR and worked for the leftist Southern Poverty Law Center. Stelter added she also has a CNN.com opinion piece on the Republicans being “democracy deniers.”

Berman explicitly said this “democracy beat” is about how Republicans are a horrible threat to democracy:

STELTER: Ari, I feel like you’re on the democracy beat. You’ve been on for years covering voting rights. When I say democracy beat, does that resonate with you? Is that something that more newsrooms should have?

And I think the media needs to understand that the most important dividing line in American politics right now isn’t between Democrats and Republicans. It’s between Republicans versus democracy.

And that we need to cover this not just through a partisan lens, but treat attacks on things like voting rights as attacks on the most fundamental rights in our democracy, and not ask which party is this benefiting. But how is it hurting voters? How is it hurting democracy? And I think that’s the lens that I’d like to see the media cover this story through more often. 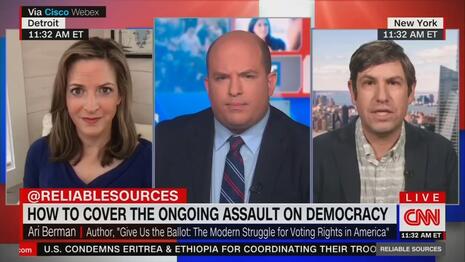 Stelter added another softball: “The banner [on screen]  right now says is an assault on democracy. Is that — is that too strong, Ari?” Berman replied “No. I mean, there is an assault on democracy right now, Brian. In the first four months of this year, 361 bills restricting voting access have been introduced, 11 states have changed their voting laws already this year to make it harder to vote in such a short period of time in such a coordinated way.”

So bills requiring a voter ID — supported by a majority of Americans of all races — is an “assault on democracy”? That’s reliably leftist.

This very partisan segment was brought to you by Fidelity and Safelite.