The New York Times attempted to save President Joe Biden’s political image after a string of abysmal economic news plagued the administration recently. 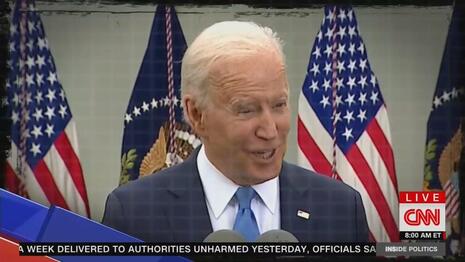 The Times spun attention away from the gas shortages, spiking inflation and atrocious April jobs growth in a story headlined, “Amid Economic Turmoil, Biden Stays Focused on Longer Term.” The sub-headline was just as insulting to Americans already experiencing the disastrous effects of Biden’s economic policies: “The president’s advisers are pushing their most detailed argument yet for the long-term benefits of a $4 trillion agenda to remake the American economy.”

Tankersley and Fandos propagandized Biden’s multitrillion-dollar agenda as a “deeper economic backbone,” despite the fact that the economy is currently reeling from inflationary pressures:

The president’s aides published what amounted to a deeper economic backbone for the argument that Mr. Biden is making publicly and privately to sell his plans to lawmakers, including the message he conveyed to a group of Republican senators he invited to the White House on Thursday to discuss an infrastructure package centered on roads, bridges, transit and broadband.

But the story got worse. Tankersley and Fandos chose to bury the most important bit of information in the 23rd paragraph: “There is no focus in the brief on immediate job creation or a quick bump in economic growth.” [Emphasis added.]

The so-called issue brief reflects the administration’s longer-term thinking on economic policy when conservatives have ramped up criticism of the president over slowing job growth and accelerating inflation.

Tankersley and Fandos even downplayed spiking consumer prices: “Administration officials express confidence that recent price surges in used cars, airfare and other sectors of the economy will prove temporary.” They continued, praising Biden’s atrocious $1.9 trillion stimulus package: “They say Mr. Biden’s $1.9 trillion economic aid package, which he signed in March, will lift job growth in the coming months, noting that new claims for unemployment fell to a pandemic-era low on Thursday.” [Emphasis added.]

Liberal outlet The Hill was a bit more realistic than The Times on the reality of what the disastrous economic news meant for Biden: “Inflation fears grow for White House.”

Conservatives are under attack. Contact The New York Times at 800-698-4637 and demand it stop playing partisan politics in defending Biden’s disastrous economic agenda.