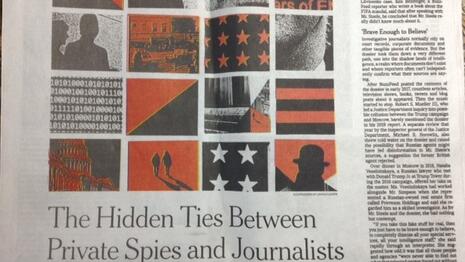 The infamous, now discredited Fusion GPS dossier that purported to expose candidate Donald Trump’s ties to the Russian government is being disowned, even by The New York Times!

A 2,500-word excerpt from a forthcoming expose by former New York Times reporter Barry Meier, Spooked — The Trump Dossier, Black Cube, and the Rise of Private Spies, made the front of Sunday Business: “The Secrets Game — Hidden ties between private spies and journalists are shaping the news.” The cloak-and-daggerish illustration made it seem like a wide-angle story, but the excerpt’s target is specific.

The piece doesn’t specifically condemn the Times, but Meier’s expose of journalism’s corrupted links to spycraft applies to the paper, which came to the defense of the anti-Trump dossier even as the document’s credibility tanked.

The Times excerpt opened with Meier failing to roust Steele from his Surrey home for an interview, before moving on to the former journalists hired by Democrats to dig up dirt on then-presidential candidate Donald Trump, a project that morphed into the dossier. 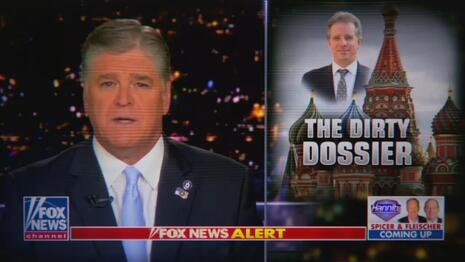 At the time, those involved with the dossier were intent on controlling its narrative and eager to capitalize on their fame. Glenn Simpson and Peter Fritsch, the founders of Fusion GPS, wrote a book about the dossier that became a best seller….

Now the glow has faded — from both the dossier and its promoters. Russia, as Mr. Steele asserted, did try to influence the 2016 election. But many of the dossier’s most explosive claims — like a salacious “pee” tape featuring Mr. Trump or a supposed meeting in Prague between Michael Cohen, Mr. Trump’s former attorney, and Russian operatives — have never materialized or have been proved false….

Beneath the dossier’s journey from media obsession to slush pile lies a broader and more troubling story. Today, private spying has boomed into a renegade, billion-dollar industry, one that is increasingly invading our privacy, profiting from deception and manipulating the news.

Meier focused on the Fusion GPS founders Simpson and Fritsch, who didn’t respond to requests for comments.

Mr. Simpson loved holding court with reporters, regaling them with war stories and presenting himself as a journalistic wise man. At a conference of investigative journalists in 2016, he said he and Mr. Fritsch had started Fusion to continue their work as reporters who righted wrongs.

It was easy for many journalists to believe that Mr. Trump would do anything to win, even — given his stance with President Vladimir Putin — collude with Russia….

But the document’s crazed charges failed to check out.

The dossier’s latest blow came last year when the identity of Mr. Steele’s collector was revealed. He turned out to be a Russian-born lawyer, Igor Danchenko, who now lived in the United States. Mr. Danchenko, like others in the private intelligence business, had stumbled into it after other pursuits failed. His contacts within Russia appeared to be not Kremlin A-listers but instead childhood friends, college buddies or drinking pals.

Meier’s revelations cast in unflattering light the Times’ previous unseemly eagerness to go to bat for the dossier. The paper previously tried to help the dossier sponsors shore up their dubious enterprise in an op-ed, “Don’t Let Trump Rewrite History.”

Left unsaid are the respectable credentials of the British spy, Christopher Steele, or the fact that he is now in hiding, fearing retribution.

(Apparently he’s not in hiding anymore, given he answered his door when Meier came calling.)