How relevant is Bette Midler? She’s got a hot take on one of the most controversial incidents  … of 1992. 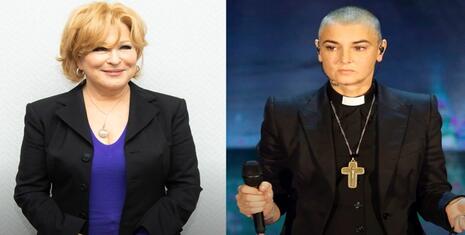 Midler praised Irish Singer Sinead O’Connor in a recent Twitter post, saying “she was right about…everything.” The Hocus Pocus witch was referring to O’Connor’s infamous tearing of an image of Pope John Paul II during her live SNL performance, which many believed at the time a career-ending move. Times have changed since. For the worse.

Midler retweeted a short written piece from J.M. Sorrell, a liberal columnist at the Daily Hampshire Gazette of Northampton, MA, who called O’Connor “brilliant and so real. Always.” Sorrell, who referred to herself as a “recovering Catholic,” said “When O’Connor tore up the pope photo, she was spot on and brave.” She added that “only spineless people with little depth faulted her.”

Sorrel wrote of then Pope John Paul II being “It’s hard to forget that specific pope as he said wearing condoms was a “sin” in countries ravaged by AIDS.” The pope, according to J.M. Sorrell, was “morally bereft.”

The final segment of Sorrell’s commentary read: “O’Connor, on the other hand, is simply who she is and not interested in appeasing anyone or making false moral claims. Love, love, love her. I know what it’s like to be a woman who speaks honestly and not in a fake demure way. We pay a price, but as we age, we really appreciate ourselves and care not what others think. Go girl.”

Yeah, girl power. Seventy-Five year-old Midler identified with this sentiment as she naturally would, and said “Turns out she was right about…everything. By “everything” Midler may have been referring to the child abuse scandal that rocked the Church after coming to light in the nineties. But really who knows. Retroactive reconciliations of O’Connor’s offensive action are now coming into vogue as O’Connors memoir entitled “Rememberings” is set to be released in the coming month.

O’Connor tearing up the Pope was an act of protest against the Catholic Church, one she does not regret to this day. Three decades after the fact, the Irish singer told The New York Times, “I’m not sorry I did it. It was brilliant.” Her very punk-rock social commentary “was traumatizing” nevertheless, after the amount of backlash she received. “It was open season on treating me like a crazy b****,” she said.

Midler’s pro-O’Connor tweet attracted positive reinforcement from other woke drones and even caught the attention of the lady herself. O’Connor responded, “OMG! Bette!!!’ You have no idea how much I have always adored you! Always wanted to sing with you!  Your tweet had made my day!!! I love you : ).” Let’s hope that frightful duet never happens.