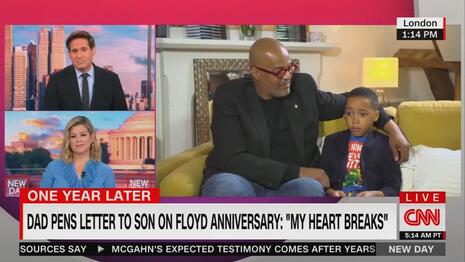 Just when you think the media can’t stoop any lower, they inevitably do. This morning on CNN’s New Day, a little boy was used as a political prop by his own progressive father and the media vultures on CNN to further the left’s fear-based messages on race and policing in this country.

To honor the one year anniversary of George Floyd’s death, co-hosts John Berman and Brianna Keilar brought on UK-based “social justice” professor at Newcastle University and Reverend, Keith Magee and his six year old son Zayden, to read the professor’s open letter to his son about growing up black in America.

Magee read aloud his letter, detailing Floyd’s death and his hopes for his child tampered by his fears about his black child being mistreated by racist, armed police officers. Afterwards, Berman praised, “That is so lovely, Reverend.” Keilar followed up by asking Magee how he talks to his young son about race: “How do you talk to your son about it? What questions does he have of you? How do you answer them?” she asked.

Shortly afterwards, Berman invited six-year-old Zayden to respond to his father’s letter: “Zayden, you know, your father is talking about some pretty serious stuff, that affects everybody. And I wonder, what do you think of what he has to say? How does it make you feel?”

Put on the spot, the poor child struggled to answer. After a few moments he offered skeptically, “Happy?” You would think the journalists would leave the nervous boy alone after this but they demanded he explain to viewers why his father’s depressing letter made him “happy.”

But little Zayden seemed too nervous or scared to respond, so John Berman stepped in to help him out, saying, he would be “happy” to have a father so concerned for his safety.

But Magee ensured he’d get his son to spout off at least one political message. The expat prompted his little boy to explain why they moved to the United Kingdom to ensure he’d be “safe” from racist U.S. police:

KEITH MAGEE: [O]ne of the things we talk about Brianna, is why we live in London. You want to tell them one of the reasons we live here?

KEITH MAGEE:  Why is it safer here than in the U.S.?

KEITH MAGEE: So that’s one of the number one reasons why I live here is that he can be a little boy. Walk in the park as a power ranger or with a toy gun and I not have to fear that someone would easily shoot him or mistake him to have a real gun….

Keilar was enthralled, reacting, “Keith, that is just sort of a sad commentary on the realities of what happens in America.” She asked Magee to elaborate on his point: “What does that say to you that this is a choice you made where that is a safer place for your son?”

Magee explained that although he loves his home country, there’s a 400 year history “of the dehumanization of black and brown bodies” and police reform and racial justice legislation won’t happen by the time his son is “of age to drive a car” so they would continue living in the U.K. until things changed in the United States.

Undisclosed by CNN, Magee is not just a concerned father but highly political, serving formerly as a religious advisor for President Obama’s campaign and his organization aims to shift public policy, according to his website.

CarShield sponsors New Day, contact them at the Conservatives fight back page here.

BRIANNA KEILAR: One father put its thoughts on paper, writing an open letter to his 6-year-old son on cnn.com. And that father, Keith Magee, is joining me now. He’s the chair and professor of practice in social justice at Newcastle University in England. And you’ll say, who is that little guy next to him? That is his son Zayden, to whom he addressed this beautiful letter.

KEILAR:  Hello. Thank you so much if both of you for being with us this morning. Keith, I want to start with you because I’m hoping — I just want our viewers to know about what you wrote. Would you mind just reading us some of the letter that you wrote to your sweet son.

REVEREND PROFESSOR KEITH MAGEE: Sure. It would be my pleasure. Dear son, we are upon the first anniversary of a deplorable killing. Last May, outside of a grocery store in Minnesota, George Floyd, a black man, was casually murdered by a white police officer. Floyd’s daughter Gianna is the same age as you. You could be playmates. That is how I know that George Floyd certainly did not choose to sacrifice, as one politician put it, his life to the cause of racial justice leaving her traumatized and fatherless. Sometimes when I look at your beautiful face, I think of that little girl and my heart breaks. My precious son, you came into my heart almost seven years ago as a gift that I know was heaven sent. And endless curiosity, cheeky bundle of energy you are beaming with self-confidence. Slow to fret and quick to trust. You are lucky enough to be born in a country where dreams can come true, so they say. And I hope that this will be the case for you. But you were also born inside black skin, and in today’s America, that is still tragically a burden to bear. Every day, I pray for strength so that I may help you to carry that burden.

Make you proud of who you are and teach you how to navigate the visible and invisible currents of racism. More than anything else, I pray that I will be able to keep you safe. No child should have to know this, but as you start to roam beyond our contented, loving bubble, you’ll encounter individuals who will see you as less than human because of the color of your outer layer. Some of them will even be the very people who have been sworn to protect and serve you. And they will be armed.

JOHN BERMAN: That is so lovely, reverend…

…BRIANNA KEILAR: This is your work. Social justice. Issues of race. How do you talk to your son about it? What questions does he have of you? How do you answer them?

Well, we talk about it from the context of my commitment to deconstructing race. We know it was constructed. We know how it came about, and I believe we have to spend our time focusing on something beyond the outer layer. So I talk about our collective humanity. I talk about what makes us alike. I explain that on the inside, we all have the same things. And that though our hair texture may be different, our shoe size may be different, that what is inside of us is all the same. We are fundamentally practical Christians. I tell people I’m practicing my faith, and in the context of christianity, I believe the entire message of it beyond doctrinal beliefs, all the other things that divide is a simple message of love. So we start from a place of love. How do we love your neighbor as ourselves is what we talk about and hope we can obtain.

BERMAN:  Which are awesome, to be honest. Zayden, you know, your father is talking about some pretty serious stuff.

BERMAN: That affects everybody. And I wonder, if, what do you think of what he has to say? How does it make you feel?

BERMAN:  I can tell you, it would make me happy because it would tell me that my father loves me a whole ton and will do everything he can to protect me and make me safe now and for the rest of my life….

KEITH MAGEE: One of the things we talk about —

MAGEE: No, no, one of the things we talk about Brianna, is why we live in London. You want to tell them one of the reasons we live here?

KEITH MAGEE:  Why is it safer here than in the U.S.?

KEITH MAGEE: So that’s one of the number one reasons why I live here is that he can be a little boy. Walk in the park as a power ranger or with a toy gun and I not have to fear that someone would easily shoot him or mistake him to have a real gun. So it’s the number one reason why we’re here in the united Kingdom, though certainly there are challenges here. But I feel safer for him on the streets and at play here in the UK.

KEILAR: Keith, that is just sort of a sad commentary on the realities of what happens in America. I think that a lot of people read what you wrote and the way that you describe, like John was speaking to, the way you describe Zayden in your hopes for him are what, you know, you would think any parent feels for their child. It really resonates. What does that say to you that this is a choice you made where that is a safer place for your son.

KEITH MAGEE:  It’s a bit disheartening because I’m American to the core. I love everything about America. But there’s this 400-year history of the dehumanization of black and brown bodies and I know that we have this urgency to fix this issue and police reform and all these things, and they are important, and it needs to happen, but it’s not going to happen in a way that I would feel secure and safe with him by the time he’s of age to drive a car. I don’t want to have the same kind of talk with him that my parents had with me. Certainly I’ll have a talk. But I want him to have something that is more normal. Something more global. And, you know, with our urgency to do legislation and to change things, I think there are a couple of things we missed. With the civil rights act, we missed the implementation plan that the United States Supreme Court struck down. So we can do police reform, but it’s the implementation plan. What does that look like? How long will it take to go into effect? I want him to be safe during that process. And so we’ve chosen to live here. There’s a lot of work that we have to do. The urgency of now is critical. It took 400 years to get us here. We’re going to have to be a little patient. It may be his grandchildren that live the reality of what I hope for, for him.

KEILAR:  Yeah, it is hard to be patient when you’re talking about the future and the safety of your children….