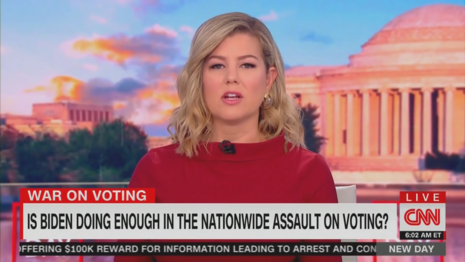 CNN’s Brianna Keilar describes herself on Twitter as an “anchor.”  The more honest description would be “left-wing activist.” She kicked off Monday’s new day with a warning: “America’s democracy is in peril. That is the warning from the American president as Republicans intensify their war on voting.”

But it gets worse. Keilar quoted from journalist Ron Brownstein channeling “voting rights activists” on the left who complained they’ve “heard very, very little from Biden presenting this as a threat to democracy.”

How are Biden’s kooky complaints that voting-integrity bills are “Jim Crow on steroids” not strong enough? But Keilar twice fretted to her Democrat-consultant guests that President Biden isn’t doing enough. As Keilar first put it to Hilary Rosen:

“Is Biden doing enough to combat the war on voting rights? Because clearly, some folks do not think so.”

“I wonder, Chuck, what you think in the near term if Biden waits too long to combat this assault on voting rights because he’s looking at his legislative priorities the ship may have sailed on a lot of these. Is he doing enough?”

So here we have “anchor” Keilar criticizing Biden from the left: he’s not fighting hard enough against those dastardly Republicans! And Keilar adopted the harshest partisan verbiage in describing GOP opposition to HR1 as a “war” and an “assault” on voting rights. As you can see, “assault on voting” was also splashed on screen.

In other highlights, Rosen demanded that Biden “jam” Democrat senators Joe Manchin and Kyrsten Sinema to get their support. She added that if those two didn’t support ending the filibuster, it was up to them to get the “damn” nine Republican votes to pass voting rights on regular order.

Rosen also let the cat out of the bag, making it clear via multiple comments that passing the voting rights bill is not about any high-minded principle, but simply about ensuring that Democrats hold onto power. She said that without H.R. 1:

Ironically, whereas Keilar carped about the Republicans’ supposed “assault on voting rights,” National Review has editorialized that [emphasis added]:

“It would be an understatement to describe H.R. 1 as a radical assault on American democracy, federalism, and free speech . . .  It would override hundreds of state laws governing the orderly conduct of elections, federalize control of voting and elections to a degree without precedent in American history, end two centuries of state power to draw congressional districts, turn the Federal Elections Commission into a partisan weapon, and massively burden political speech against the government while offering government handouts to congressional campaigns and campus activists.”

It’s a mark of how totally partisan CNN is that the segment consisted of two Democrat consultants and an “anchor” who was pushing them, and Biden, from the left. Nowhere to be seen or heard was anyone from National Review or elsewhere making the conservative case against H.R. 1.

CNN “anchor” Brianna Keilar pressuring Biden from the left was sponsored in part by Tractor Supply and USAA.

BRIANNA KEILAR: Hilary, you first, is Biden doing enough to combat the war on voting rights? Clearly some folks do not think so.

HILARY ROSEN: I think that, you know, Joe Biden, as you know, does not historically like to jam his colleagues. But he has just got to jam Joe Manchin and Senator Sinema on this because there’s no other alternative around the country for Democrats.

KEILAR: I wonder, Chuck, what you think, here in the near term, if Biden waits too long to combat this assault on voting rights because he’s looking at his legislative priorities, the ship may have sailed on a lot of these. Is he doing enough?
. . .

ROSEN: Joe Manchin and Senator Sinema, both of them, they have a choice here. If they want to try and move legislation through regular order, which is what they say, which means subject legislation to the filibuster, where it needs 60 votes. Then they’ve got to take responsibility to go get those damn other nine votes in the Senate. But if they can’t, they’ve got to let Democrats end the filibuster and pass the voting rights reform bill, because literally Democrats across the country are going to suffer from their stubbornnFress.

KEILAR: Do you think, Chuck, that Democrats should get rid of the filibuster?

CHUCK ROCHA: I do. And I do because of a couple of things. As we worked on races around the country, you saw this surge of folks participating. They’re younger, they’re multicultural, their ethnic backgrounds are so diverse. Well, a lot of these people fall into categories of needing to vote early.

ROSEN: I think without ending the filibuster, or more importantly, without getting a voting rights federal bill that stops these Republicans in these state legislatures from stopping access to voting, we’re going to guarantee a Republican majority. Literally the only way to stop it is to have a federal voting rights bill.