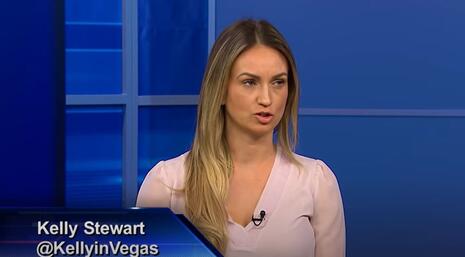 A month ago, ESPN heralded its new betting analyst hire Kelly Stewart as someone “Bringing her unique background as one of the industry’s foremost handicappers … .” Before even starting the job, Stewart is gone. ESPN succumbed to the Twitter mob and canceled her for angry tweets from 2012.

Kelly AKA “Vegas” Stewart made her mark as a betting analyst for the Bleacher Report sports blog, WagerTalk.com and the Las Vegas Review-Journal. She was recently hired for a role on The Daily Wager program, but hadn’t even started work before drawing a pink slip from ESPN.

Twitter trolls mined Stewart’s social media account and found angry responses she had posted to critics of females working in sports media. She now says the words she used nine years ago “are unacceptable and hurtful but I cannot apologize for the vicious attacks I, and so many other female personalities, endure from anonymous online trolls.

“I wish ESPN had been willing to stand behind me, particularly because I’d already been suspended for these Tweets by another company several years ago, but I cannot control their decision,” Stewart wrote. “I can only say I’m sorry for the person I was and some of the mistakes I made in my youth.” Her full statement can be read here.

Clay Travis, of Outkick, indicted the cancel mob for their own inadequacies, stating:

“Call it cancel culture, call it life-ruining, it’s a movement to make those most dissatisfied with their own lives feel important.”

Travis said if people yell loud enough and use loaded words like “homophobic” and “racist,” “your outrage could make a difference”. And destroy someone’s career. It’s pathetic for the Twitter crowd to search for old tweets and bring someone down, he said. We see it at the most opportune times – during the NFL draft, when someone’s pitching a good game or when someone gets hired for a high-profile job. It’s often someone who’s not on board with the LGBT agenda who draws the ire of cancel culture.

Travis says cancel culture is also about people who are “quietly ashamed of their past.” They’re at the forefront of the toxic cancel culture, in a “self-serving quest to ruin lives. They don’t stop. Their pasts can’t be erased so they proactively try to erase your future.”

ESPN’s selective enforcement of cancel culture is highly disturbing. A few months ago, broadcaster Mark Jones used Twitter to celebrate Rush Limbaugh dying of lung cancer. Jones is black and has established left-wing credentials. He was promoted by the woke ESPN. Stewart is white, lacks a far-left pedigree and she is gone. It doesn’t get any more complicated than that.

Anyone out there interested in replacing Stewart as betting analyst at ESPN? Anyone whose social media history includes hateful remarks about conservatives has a leg up on the competition.