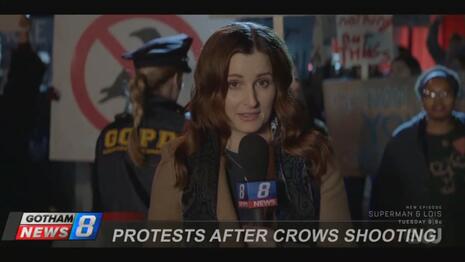 The June 6 episode “Armed and Dangerous” picks up right where we left off following Luke (Camrus Johnson) being shot by the private security team the Crows basically for being black. Unfortunately for him, his life hangs in the balance as he’s placed in a coma after losing too much blood. Meanwhile, Ryan/Batwoman (Javicia Leslie) tries to get to the bottom of the shooting to find justice for her friend and hopefully help save his life.

Of course, the episode makes it abundantly clear that Luke is only in this situation because he’s black and because the Crows, the show’s regular police stand-in, are racist. In fact, the Crows even let the real white suspect in a crime run away because they were too engrossed with shooting Luke. Even worse, they cover their tracks by falsifying bodycam footage of the shooting.

Dewitt: The Crows have issued a statement on the incident along with newly released body camera footage. We should warn viewers that this footage is disturbing.

Ryan: Wait. How was Luke holding a gun? This makes me want to puke.

Dewitt: The Crows have just released the name of the armed suspect– Lucas Fox, who was released from jail hours before the confrontation. The gun found at the scene was also connected to a recent gas station robbery. 27-year-old Fox is the son of the late Wayne foundation CEO Lucius Fox and currently works as head of security at Wayne Tower.

Ryan: They literally photoshopped a gun into Luke’s hand in the bodycam footage.

Sophie: Not just any gun. It was linked to an armed robbery, which means when Luke wakes up they’re gonna charge him for robbery and attempted assault.

Considering all the police shootings that have been exonerated or at the very least complicated by released bodycam footage, I’m doubtful that claiming they’re all photoshopped will end racial tension. Luke himself adds fuel to the fire in his own subconscious, courtesy of a hallucinated Bruce Wayne (Warren Christie). They discuss his situation with Bruce getting Luke to acknowledge that “there is a whole mess of people out there willing to believe that you deserved it just because you’re black.”

Luke: This is so unfair.

Bruce: None of this is fair. It doesn’t matter that you worked for Batman or both Batwomen, that you saved hundreds of lives, cleaned up entire neighborhoods. You have given hope to thousands of people. You still got shot… And there is a whole mess of people out there willing to believe that you deserved it just because you’re black.

Luke: Then what’s the point?

Bruce: It’s not for me to say, but you need to decide… Now.

Luke: You left, and I–I’ve always wondered why. Why you just walked away, hung up the cape… And it’s because it’s just all so damn depressing. Because no matter what good we try to put into the world, it’s still a world where this happens. And I don’t want to live in that world anymore. I want to be with my dad.

Bruce: And that’s your choice.

Contrary to this scene, nobody believes shooting victims deserve it simply because they are black. Also, contrary to the scene, Luke does survive, but Ryan is unable to find the real video to clear his name.

Nevertheless, Jacob Kane (Dougray Scott) follows Ryan’s advice to “burn it down” by formally disbanding the Crows and charging the Crows agents with assault with intent to kill. If you are confused as to how a system that needs to be burned down would still trust a police precinct to investigate and arrest people, don’t hold your breath. The show does not and probably will not explain it.

There are more than enough shows wrongfully arguing that the police are evil and racist, and more than enough episodes of Batwoman to show that as well. Let’s hope this is the final one. Yeah, that’ll happen when they can get the actual Batman to save the day.

This show was sponsored by commercials from Dove, Dunkin’ Donuts, and T-Mobile.