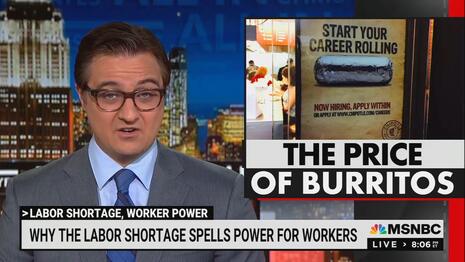 How’s this for elitism? On Thursday “All In” MSNBC host Chris Hayes sought to downplay the rising inflation that is striking at the wallets of consumers. Something tells us he wouldn’t be downplaying rising inflation if Donald Trump was still President.

Hayes started by mocking consumers’ concerns over inflation by making it just about the price of food at Chipotle:

“The Republican Party has found the achilles heel of the Biden economy, expensive burritos. This week, the popular fast food chain Chipotle announced they are raising prices to cover the cost of increasing wages for their employees. Heaven forbid. Now the price increase is all of 4%. Prices vary by location, but that, that basically means as if your Chipotle burrito used to cost say $10, it will be going up $10.40. And if your side of guac and chips will go for $4.70 to $4.89.”

Inflation is not just about slightly more expensive burritos and guac, Chris!

Runaway inflation is a serious concern. As The Heritage Foundation noted in a recent report on our inflation problems: “When inflation is ‘too high,’ that’s also bad because it can lead to prices that are out of reach for consumers, thus leading to unemployment when businesses can no longer sell their products.”

If inflation continues to spiral out of control, it will derail our economy’s already anemic recovery, which many say has already been sabotaged by the Biden Administration’s economic policies.

Later, Hayes doubled down on his class warfare rhetoric by claiming corporate CEOs, and Republicans don’t want to pay their employees more. To prove this point, Hayes played a deceptively edited video of former Reagan economic advisor Art Laffer to make it seem like he didn’t think minorities, young people, and the poor were worth $15 dollars an hour. Here is the out of context clip:

That seems really cruel right? Well, that’s not the point Laffer was making at all. Here is what Laffer actually said:

The point Art Laffer made was absolutely right. Artificially raising the minimum wage, like Hayes proposes, would harm college students, poor people, and minorities because many of the entry level jobs they seek aren’t worth $15 an hour. So employers will have to either do away with the jobs or hire less of them.

Like all Liberal policies, they harm the very people they are designed to help.

This dishonest and economically illiterate segment was brought to you by Allstate and Applebee’s. Let them know how you feel about them sponsoring this content by visiting our Conservatives Fight Back Page here.

All In With Chris Hayes

CHRIS HAYES: Good evening from New York. I’m Chris Hayes. The Republican Party has found the Achilles heel of the Biden economy, expensive burritos. This week, the popular fast food chain Chipotle announced they are raising prices to cover the cost of increasing wages for their employees. Heaven forbid. Now the price increase is all of 4%. Prices vary by location, but that, that basically means as if your Chipotle burrito used to cost say $10, it will be going up $10.40. And if your side of guac and chips will go for $4.70 to $4.89. Color me a little skeptical that that is going to be the deciding factor in the midterm elections. Oh and ever mind the fact that chipotle raked in $6 billion last year, paid their CEO $38 million. But you can understand why Republicans want to run with this. This is from the National Republican Congressional Committee website. Your burrito just got more expensive. Now, this is a core animating issue of the right of conservatives. Has been for decades, if not centuries. Business owners and titans of capital and right wing parties scare mongering about inflation and wages going up too high, and the connections between the two. And inflation is going up. You’ve probably noticed it in your daily life. There’s new data out today showing the consumer price index. Basically just the average price of a bunch of stuff is up 5% since May of last year across the basket of items that they monitor. That’s the fastest rate of growth since 2008. Now as we’ve talked about previously on this show, a lot of that seems to be transitory with the strangeness of this economy coming back to life after more than a year of a pandemic. Back in May of 2020, for instance, a lot of things like oh, airfare and car rentals were really cheap because there was zero demand for them. As we get back to normal, demand and prices are back up. And in many cases we have a kind of mismatch, right? Between the demand and the available supply, how many cars there are on the market, for instance. There is a good reason to think a lot of that mismatch is going to go away. That’s the bet the Biden Administration and the federal reserve are making. The deeper issue here that is really animating the Republican Party and the CEO class is the fact that labor is scarce right now. It is hard to find people to hire.

HAYES: But for Republicans, conservatives, most bosses, CEOs, you can tell from their burrito freakout, raising wages is not something they want to do. Here’s how the former economic adviser to president Ronald Reagan put it:

ART LAFFER (AUDIO CLIP): For those people, Sandra who are coming into the labor force brand fresh, not old timers who’ve been around for awhile, the poor, the minorities, the disenfranchised, those with less education, young people who haven’t had the job experience, these people aren’t worth $15 an hour in most cases.

HAYES: Oh! Well he just came out and said it. The poor, the minorities, the disenfranchised, the young, they’re not worth it. I’m afraid you’re wrong, Art.

SANDRA SMITH: There are currently 9.3 million job openings in this country, Art. People are having a hard time getting folks through the door. Ok, Austin wants to talk about the current McDonald’s CEO, Kempczinski. He’s noting that artificial intelligence technology has 85% accuracy with filling orders. With workers having to step in for approximately one in five orders.  It’s going to be a big leap, he says to go from 10 restaurants to 14,000 restaurants. But there is no doubt they are working in that direction, Art.

ART LAFFER: Yeah, for those people, Sandra who  are coming into the labor force brand fresh, not old timers who’ve been around for awhile, the poor, the minorities, the disenfranchised, those with less education, young people who haven’t had the job experience, these people aren’t worth $15 an hour in most cases. And so therefore when you have a $15 an hour minimum wage, they don’t get that first job, they don’t get the requisite skills to earn above the minimum wage. And after a few years they become unemployable. After becoming unemployable, they become hostile. And that what you’ll find happening is this technology has created an underclass of people who are really just bid out of the labor market and will remain out of the labor market for most of their lives, and this is, I think is, just a tragedy. I love the technology, but the technology is replacing the jobs for these people. And it’s a killer. It’s a killer for just the people who need the help the most.