The latest news out of radical racial justice land would be terrifying if it weren’t so damn funny. BET studios actually dropped a trailer for a new movie titled “Karen,” a flick about a terrifying “entitled white woman” who terrorizes her new African American neighbors. 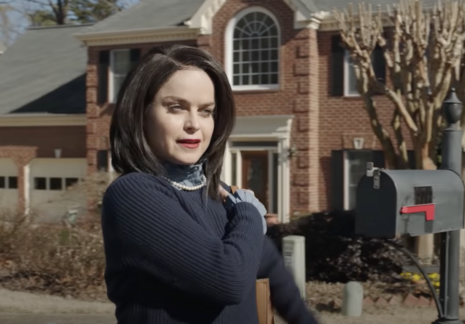 No, this is not a drill. This is actually the new horror premise intent on gripping woke audiences.

The trailer, which started going viral social media on June 19, featured Orange is The New Black actress Taryn Manning as our titular villain. The clip starts out with an African American couple discussing their move to what appears to be an idyllic suburban neighborhood, though the husband senses something’s off. “I guess this is a long way from East Point,” he says. Though his optimistic wife responds, “Baby, you just got to give it a chance.” Oh no, you just know there’s something bad about that neighborhood.

Then you see it. With one shrill strike of piano, Manning’s Karen flashes on screen. We see her suspiciously eye her new neighbors as they start moving into their home. Cut to the next scene, and Karen is at lunch with a friend, telling her in a concerned tone that the newcomers are “black.” She then goes over to another table where two black men are laughing and having a good time, and she utters the most sinister line in modern cinematic history: “Do you mind keeping it down? If you don’t comply I’ll tell the manager.”

Someone get us a paper bag. We’re not good with horror movies, and this one has already got us hyperventilating.

Things start to get even more suspicious as our protagonists start to notice that Karen is putting up A LOT of security cameras around her house. Oh and she confronts her new black neighbor about taking his “trash cans off the curb, right when the trash is picked up.” Dude, that’s not even scary in a racist way. Anyone who has experienced an aggressive HOA is going to get the heebie jeebies during that scene.

The plot seems to thicken as our sleuthy African American wife puts two and two together: “Wait a minute, we have a white entitled neighbor named Karen?” As the on-the-nose realization sinks in, Karen’s behavior seems to get even weirder. It turns out that Karen isn’t just an entitled white woman, she is a full blown racist who calls the cops on local black teenagers, and sics angry looking officers (clearly the brutalizing type) on our protagonists. Shots of Karen looking more and more maniacal flash onscreen as the black couple’s life goes to hell.

At one of the climactic shots of the trailer, a Confederate-Flag emblazoned liquid soap dispenser is shown – THE SMOKING GUN that points to Karens’ actual racism. Perhaps it’s an allusion to her being the great, great granddaughter of Robert E. Lee. THE HORROR!

The fact that this isn’t satire – it’s played pretty seriously – is what makes it hilarious. The trailer is so insane that it already has 2.9 million views, less than four days since it was tweeted out. Though again, don’t let the hilarity of the trailer fool you. The premise is pretty racist towards suburban white women. Seriously, imagine if a black stereotype was the premise of a horror movie. We wouldn’t hear the end of it.