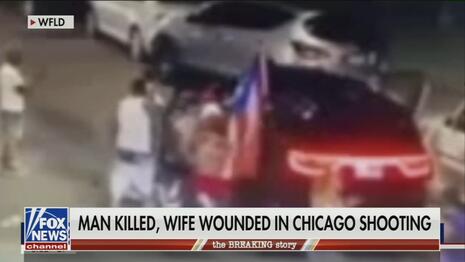 The national Latino networks kept silent – with the exception of a 42 second straight-forward report from Telemundo News – following the vicious shooting of a Puerto Rican couple in Chicago’s Humboldt Park neighborhood, proof evident that “hate crimes” only get reported when appropriate for their political agenda.

The horrific video of the shooting has achieved social media virality, and yet not a single mention on the Latino networks. The couple was dragged out of their car and shot at point-blank range. The man, Gyovanny Arzuaga, died and his girlfriend and mother of his two children remains in critical condition. None of this seemed to matter to Univision or Telemundo, the two main networks for the nation´s Hispanic market.

The Latino networks devoted mere seconds to this weekend’s violence in Chicago, wherein 21 persons were shot. Instead, the networks chose to focus on drug gang killings in northern Mexico.

Sad to say, but these networks are more interested in stoking racial grievances by devoting full segments to every last instance where an Anglo tells someone to “Speak English”. A quick search on the subject by MRC Latino turned up a number of reports, including these two, one from Telemundo, the other from Univision, that aired during the Trump administration and fit perfectly with their race grievance agenda.

JOSE DIAZ-BALART, TELEMUNDO: Racist attacks on Latinos are becoming commonplace. They humiliate them, they insult them, they threaten them.

WOMAN YELLING: Shut up! Get away!

FRANCISCO CUEVAS, TELEMUNDO: This other racial assault incident occurred at a supermarket in Colorado, in which a woman harasses and insults a Latino family for speaking Spanish.

CRISTINA RIOFRIO: You are a racist.

RIOFRIO: And you shouldn´t be part of it

RASHEL DIAZ, UNIVISION: The young woman we heard there is Cristina Ríofrio, a 19-year-old Ecuadorian victim as we can see of this verbal aggression.

DIAZ: In the news we report and see that this type of racist attack is becoming more frequent.

FRANCISCO CUEVAS, TELEMUNDO: Hate crimes against Latinos are on the rise and unfortunately, many of those cases are not recorded on video or reported by victims for fear of their immigration status.

The silence is deafening and it will continue to be. Now that the liberal media darlings are in charge, the only thing that matters to Latino media is that massive numbers of undocumented immigrants enter into the United States through an increasingly open border.

This partisan disinformation at the Latino Networks is sponsored by advertisers like Dove. Click here to let them know what you think.