One of the most curious things about America is how many of our most celebrated billionaires sound like socialists. Bill Gates and Warren Buffett love talking about how more and more of their wealth should be taxed. Jeff Bezos bought The Washington Post, enabling it to wage relentless war on the Republicans. 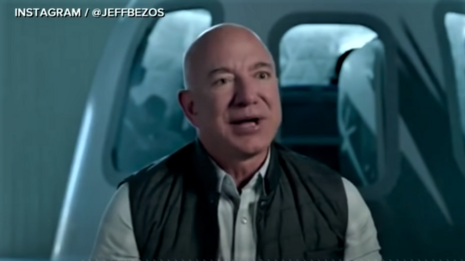 That’s why it seemed a little funny for the socialists at National Public Radio to report some public hatred of Bezos as news. The headline was “Tens Of Thousands Sign Petition To Stop Jeff Bezos From Returning To Earth.” On July 20, Amazon’s founder and his brother Mark will enter the New Shepard suborbital rocket system as part of the first crew aboard the reusable rocket for its 11-minute voyage to space.

Eleven minutes isn’t enough for the billionaire-haters. NPR’s Dustin Jones reported “Since Bezos made the announcement about his journey to space this month, tens of thousands of people have come together to petition against his return to the planet.”

The largest misanthropic petition at Change.org – titled “Do not allow Jeff Bezos to return to Earth” – had collected more than 80,000 signatures by June 22. “Billionaires should not exist,” its brief statement read. “On Earth, or in space, but should they decide the latter they should stay there.”

It sounded a little Marxist. The credit line was “Ric G started this petition to the proletariat.”

More than 20,000 people have signed the “Petition To Not Allow Jeff Bezos Re-Entry To Earth.” This one has stronger hate speech. “Jeff Bezos is actually Lex Luthor, disguised as the supposed owner of a super successful online retail store. However, he’s actually an evil overlord hellbent on global domination. We’ve known this for years.”

This one’s so kooky that it could be satire: “Jeff has worked with the Epsteins and the Knights Templar, as well as the Freemasons to gain control over the whole world.”

In a video posted to Instagram, Bezos proclaimed “If you see the Earth from space, it changes you. It changes your relationship with this planet, with humanity. It’s one Earth.” That’s a noble sentiment, but it’s false.

The capitalist-haters will always hate successful businessmen. We will always have class warriors to divide us. It’s easy to feel that envy for the wealthiest, that most of their riches must be undeserved. It’s not as easy to think about how companies like Amazon have revolutionized business and made life better for millions of consumers.

Earlier, on their evening newscast All Things Considered on June 11, NPR aired an allegedly humorous commentary from comedian Vinny Thomas where he imagined riding into space with the Bezos brothers and speaking as the Voice of the People: “You guys could probably feed everybody down there if you really wanted to, huh? They laugh. And then I laugh, too, you know – just to fit in.”

NPR also reported the Amazon magnate’s estimated net worth of $182 billion is bigger than the gross domestic product of Hungary or Ukraine, according to data from the International Monetary Fund. If you’re religious, it seems obvious that the super-rich have a duty to help the poor. But it’s also true that if you’re religious, middle-class people have a duty to help the poor. You could argue that people sending thousands or millions of dollars to NPR should be spent on feeding people instead of funding propaganda.

Socialists always feel that rich people have way too much freedom, and they need to be energetically oppressed. It’s taking it to a whole new level to want them banned from the planet.