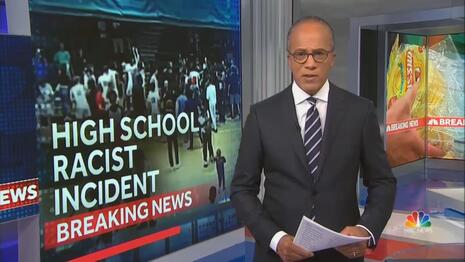 Under their African-American anchor Lester Holt, NBC Nightly News takes special care to report on incidents of racism and racial insensitivity…typically by white people. On June 22, Holt touted at the beginning of his show “A shocking racist incident on the basketball court. Tortillas hurled at a team from a majority-Latino high school. The growing outrage.”

A few minutes later, this ridiculous prank received a national airing. “After a crushing championship loss for the predominantly hispanic Orange Glen High School basketball team from the outskirts of San Diego, insult added to injury when several players were pelted by tortillas,” reported NBC’s Guad Venegas. “They say fans and players from the opposing team, Coronado High, a predominantly white school in an affluent area, were throwing them.”

This is not only stupid, but bound to result in disorder and even violence. The coach reported some Coronado community member brought the tortillas, so you can’t just blame the teenagers. The Coronado school board denounced this post-game ugliness: “We condemn the racism, classism, and colorism which fueled the actions of perpetrators.” The NBC reporter added “members of the Orange Glen team say the sting of defeat pales against the wounds of racism.”

But there are times when you wonder about the news judgment of networks like NBC when it comes to the “wounds of racism.” When it comes to “minorities hardest hit,” shouldn’t a double-murder pack a bigger wallop than than tortilla-tossing?

On June 22, Tom Schuba of the Chicago Sun-Times reported “Yasmin Perez and Gyovanni Arzuaga fell in love at first sight and were inseparable. They died together during a brazen weekend attack. The parents of two young children, Perez and Arzuaga were gunned down Saturday night amid Puerto Rican Day festivities in Humboldt Park. Arzuaga, 24, died that night and Perez, 25, Tuesday morning.”

The young couple were involved in a minor car crash, and were then ambushed. “Several people beat Perez and then shot her,” chief of detectives Brendan Deenihan said, and when Arzuaga came to her aid, he was “he was shot by a second person ‘almost execution style.’”

A video widely shared on Twitter shows the couple lying in the street next to their car as the attackers ran off. The race of the attackers is still unclear.

These two young Latinos were among eight people murdered in Chicago over the weekend , out of 50 shooting victims, according to the Chicago Tribune.

NBC didn’t do that story, even though Lester Holt anchored the evening news for 14 years in Chicago. Apparently the violence there is too routine to be network “news.”

Jorge Bonilla, director of the Media Research Center’s MRC Latino project, tweeted “A Puerto Rican couple gets mowed down on the streets of Chicago without so much as a peep from the national Latino networks. Had an Anglo yelled ‘speak English’ at them, we’d have seen multiple A-Block coverage segments splashed across all platforms.”

NBC and everyone else dramatically overcovered the fake hate crime alleged by African-American TV star Jussie Smollett in Chicago in 2019, so purported “thought crimes” are apparently bigger news than the worst violent crimes. We’re lectured that “black lives matter,” but only if they’re useful in blaming white people.

This distortion is what happens when “news judgment” is heavily influenced by progressive notions of race and systemic racism in America. The coverage of offenses depends not on their gravity, but on how it serves a master narrative of white privilege, patriarchy, and policing.