Before we all bid a fond farewell to Pride Month, Democracy Docket, a left-wing platform dedicated to pushing progressive voting policies and reducing election integrity, is addressing one of the most critical issues of the age. It’s released aa “data dive” into how voter ID laws “disenfranchise transgenders.” 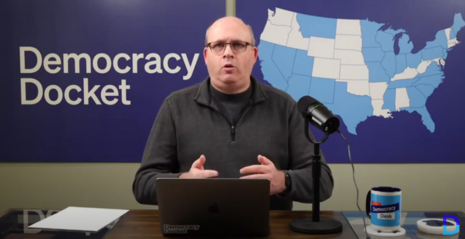 The plight of this tiny and deeply confused demographic is not new. Bloomberg tried to promote the same idea at the end of last year, but the Democrats were so focused on pushing the idea of disenfranchised black voters that they ignored this ‘problem.’ But according to the recent article, voter ID laws are a “favorite of Republicans who want to limit ballot access.” A recent poll actually suggests that around 81% of Americans support voter ID laws, and they definitely aren’t all Republicans.

The Docket further claimed that ID laws “especially impact transgender voters who often face challenges in obtaining an ID that accurately reflects their gender identity.” Maybe because your ID is supposed to have your real gender on it? If you want to change your whole appearance and become something that you’re not, you can at least go to the DMV and take a new photo. Voting is not supposed to be the easiest thing in the world, if we want votes to count we have to be sure that only people who are actually eligible can cast a ballot.

According to data collected by the self-proclaimed “progressive platform,” about one million transgender individuals were able to vote in 2020, but 27% “lack qualifying identification that reflects their name and gender.” So they had the motivation to alter their identity but they can’t go get an updated ID?

The other issues are that trans voters face “serious harassment when presenting their identification at the polls” if their appearance doesn’t match the ID. They also claim that “updating one’s identification is expensive, time-consuming and sometimes impossible.”

The bigger problem here is that we have an issue with accountability. Instead of just saying that these people are lazy and they don’t want to take the time to go get an updated ID or get a job so that they can pay the $5-20 fee, they write a whole article whining about laws that the majority of Americans support.

But, they still do not provide any real solutions to the supposed “disenfranchisement”. These problems will all just disappear if we “repeal these restrictive provisions” and “protect trans voters” by “ensuring they are not subject to unconstitutional discrimination when casting their votes.”

What they are really saying is ‘let’s get rid of all voter ID laws so that illegals can vote and the Democrats can win more votes.’ The founder of Democracy Docket, Marc Elias, has an obvious leftist agenda that he constantly pushes on social media and this is just another desperate attempt to fit in with the rest of the insane Twitter trolls.