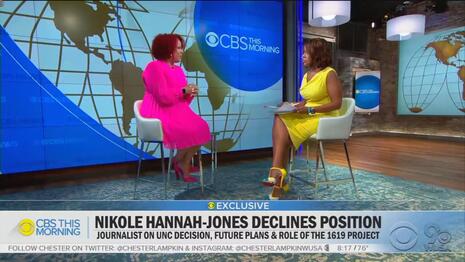 The journalists at CBS This Morning on Tuesday continued their efforts to hide the historical illiteracy and massive errors in the 1619 Project. Co-host Gayle King devoted 10 minutes to gushing over lead writer Nikole Hannah-Jones. The New York Times journalist who just turned down a professorship position at the University of North Carolina after a tenure battle.

Appearing as an exclusive for CBS, King focused on Hannah-Jones’s move to Howard University and her rejection of UNC. As for the 1619 Project, the host fawned, “Can we say you have a 20 year career with impeccable credentials? Let’s talk about the 1619 Project. Because The New York Times did issue a clarification, not a correction. They said they have stood by you. There was a clarification. What was the clarification and what is your response to the criticism?”

Asking the person involved in error-strewn project to explain the “clarifications” is sloppy lazy journalism. The problem with The 1619 Project is a problem with facts. Distinguished historians, including Pulitzer Prize-winners, hammered the errors. In a 2019 letter to The New York Times, Victoria Bynum, James M. McPherson, James Oakes, Sean Wilentz, and Gordon S. Wood wrote:

We are dismayed at some of the factual errors in the project and the closed process behind it.

These errors, which concern major events, cannot be described as interpretation or “framing.” They are matters of verifiable fact, which are the foundation of both honest scholarship and honest journalism.

King could have mentioned this, or that Leslie M. Harris, professor of history at Northwestern, said the Times was aware of the historical errors at the time of publication. But, of course, she didn’t.

Instead, she allowed Hannah-Jones to offer this highly sanitized version:

The clarification was that we added two words to a statement on the role of slavery in the American Revolution…. The original text said that one of the primary reasons that colonists decided to break off from the British empire was to preserve slavery. We added that “one of the primary reasons is that some of the colonists decided to break off.” It was a clarification and I think that, you know, in academia and journalism we should clarify.

King’s “exclusive” featured Larry King-esque lazy questions with no interest about the details. Regarding UNC’s decision to not immediately offer Hannah-Jones tenure, the host vaguely wondered, “Why do you suppose they didn’t right away offer you tenure? What do you think the reason is”

In 2019, King and the other This Morning co-hosts interviewed Hannah-Jones and allowed her to tie everything to slavery. Here’s King: “You look at sugar that we eat. But the thing that stuck out to me was health care, you can tie health care to slavery.”

The attempt to hide the historical corruption behind the 1619 Project was sponsored by Progressive insurance and Toyota. Click on the link to let them know what you think.

A transcript of the questions can be found below. Click “expand” to read more.

NIKOLE HANNAH JONES: Thank you so much.

HANNAH-JONES: I’ve decided to decline the offer of tenure. I will not be teaching on the faculty of the University of North Carolina Chapel hill. Very difficult decision. Not a decision I wanted to make. Instead I’m going to be the inaugural Knight Chair in Race and Journalism at Howard University.

HANNAH-JONES: Absolutely. Because look what it took to get tenure. This was a position that since the 1980s came with tenure. The Knight chairs are designed for professional journalists when working into the field to come into academia. Every other chair before me who happened to be white received that position with tenure.

HANNAH-JONES: No. Exactly. I went through the tenure process and I received the unanimous approval of the faculty to be granted tenure. And so to be denied that, to have that vote occur on the last possible day after threat of legal action, after weeks of protest, after it became a national scandal, it’s just not something that I want anymore.

KING: Because there were two chances it seems to me they could have voted for tenure, in November. Then you heard the tenure offer was being pulled. Did anybody explain why it was being pulled?

KING: Now at one point I believe there was an offer that you could work there — you could teach for five years and then they would reconsider tenure and it seems at one point you had accepted that offer, right?

KING: You decided to do that? And what changed your mind?

KING: Why do you suppose they didn’t right away offer you tenure? What do you think the reason is?

HANNAH-JONES: I mean, what has been reported is that there was a great deal of political interference by conservatives who don’t like the work I’ve done, particularly the 1619 Project, and also by the powerful donor who gave the largest donation in the 70 year history of the journalism school. So it’s pretty clear my tenure was not taken up because of political opposition because of discriminatory views against my viewpoint and I believe my race and my gender.

KING: Let’s talk about it. Should politics be part of this process?

KING: Can we say you have a 20 year career with impeccable credentials? Let’s talk about the 1619 Project. Because The New York Times did issue a clarification, not a correction. They said they have stood by you. There was a clarification. What was the clarification and what is your response to the criticism?

HANNAH-JONES: Sure. So the clarification was that we added two words to a statement on the role of slavery in the American revolution.

KING: What were the two words?

HANNAH-JONES: Right. The original text said that one of the primary reasons that colonists decided to break off from the British empire was to preserve slavery. We added that “one of the primary reasons is that some of the colonists decided to break off.” It was a clarification and I think that, you know, in academia and journalism we should clarify. That’s never been seen as making a project illegitimate because you try and strengthen and clarify your argument.

KING: You’ve released an eight page statement. I encourage people to read the statement. It’s eight pages where you really take us through exactly what happened. I want people to understand you had offers from many universities after this started to arise with North Carolina. Many people approached you and said, please come here, including Howard. Why did you decide that it would be Howard? I raise that question because some would say, look, “Howard already understands this. Would you be more effective working for say a predominantly white university that may need to understand the work that you do?

KING: Had you told North Carolina your decision before joining us today? We like an exclusive always, but had you informed them that this was a decision you were going to

KING: What is the personal toll this has taken on you? You’ve been a Tar Heels fan since you were a little girl. Go heels, I know you’re supposed to say that when you talk about North Carolina. You’ve been a fan for a long time. What has this meant to you personally? How has this affected you personally?

KING: How do you feel going to Howard? I know at Howard I would imagine they are doing the hula that they have Nikole Hannah-Jones on their staff.

KING: I think we will say congratulations to you, Nicole Hannah-Jones and we’ll get a statement from the University of North Carolina. Thank you so much for telling us this morning.