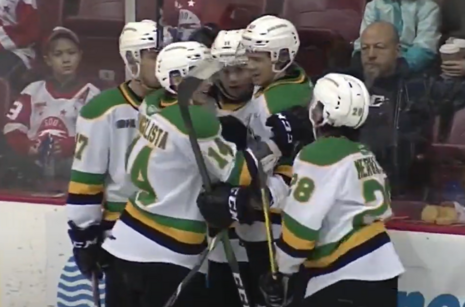 Canadian sports leagues still haven’t gotten the memo that people do not need to live in fear over COVID-19.

The Ontario Hockey League – one of the three major junior hockey leagues in Canada – still thinks that people need to be herded like a pack of little children at hockey games and is taking ridiculous measures to make sure no one “misbehaves.”

When the Peterborough Petes hosted the Ottawa 67’s on Monday, cops patrolled entrances to ensure people had their vaccination cards to prove they had at least two doses of the COVID vaccine 14 days prior to the event. Only 500 fans were allowed into the Peterborough Memorial Centre (which is capable of hosting over 4,000), and those who couldn’t provide proof of their vaccination status were told to leave immediately.

Inside the Centre, things got crazier. You were not allowed to leave your seat unless you were using the restroom or getting a snack. Stadium personnel patrolled the crowds, making sure they didn’t “linger near the snack bar or the lobby, and ushers wearing clear plastic face shields were in place to shepherd any stragglers.” In some nonsensical way, they must think that not being around each other is the only possible way to keep people from getting sick.

But also notice the wording here: “shepherd,” which implies the fans in attendance were sheep too dumb to think for themselves and needed to be protected from the big, bad coronavirus.

Sports fans need to stop buying into the narrative that they will die if they go to sporting events. Thankfully, we are seeing plenty of momentum against this nonsense that still has a home in Canada.

In a clip that has reverberated through the world of the interwebs, over 65,000 maskless fans crowded into Lane Stadium at Virginia Tech to watch the Hokies take on the North Carolina Tar Heels.

Not to be outdone, 76,000 strong poured into Camp Randall Stadium to watch the visiting Penn State Nittany Lions defeat the Wisconsin Badgers.

While the Petes are still trending towards having capacity crowds in October, they have suffered greatly as a result. Team President Dave Pogue said they have lost roughly $1 million in revenue since the pandemic began, and admitted that his league “cannot function without fans.”

So, if this is the case, why hasn’t the OHL allowed fans to return sooner? The answer is simple: they have let an irrational desire for safety, mingled with an unhealthy fear of “killing people” by letting fans in, override logic and common sense.

America is finally starting to wake up and realize that we don’t care if Dr. Fauci frowns on sports fans gathering. If we live in fear, life isn’t really worth living. How long will it take for our northern neighbors to figure this out, too?