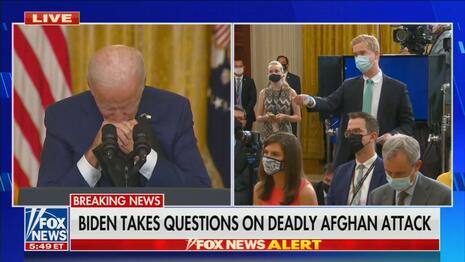 On Tuesday, Politico published an article entitled “Biden anxiety levels” in which White House correspondent Alex Thompson detailed how President Biden’s own staff cringe whenever their boss takes questions from reporters – a scene many of them can’t even bear to watch. The piece described how “some White House staffers will either mute him or turn off his remarks” for fear of seeing him struggle to stay on message while talking to the press.

“Joe Biden often thinks he’s his own best messenger. Many people in his own White House don’t always agree,” the report began. Thompson noted how “they’re filled with anxiety that he’s going to take questions from the press and veer off the West Wing’s carefully orchestrated messaging.” One anonymous current administration official admitted: “I know people who habitually don’t watch it live for that reason.”

Even though “Biden’s advisers have urged him to answer fewer of the questions being shouted at him by reporters covering his events,” Thompson observed that the President “has a tendency to buck those staffers trying to rein him in.”

The reporter further explained how Biden’s “verbal miscues have been causing headaches for him and his team” and inflicting real political damage on the White House:

Biden has delivered several self-inflicted wounds during freewheeling Q&A sessions that required immediate clean-up. On Afghanistan, he told reporters that a Taliban takeover of the country was “highly unlikely,” said Al Qaeda was “gone” from Afghanistan when it wasn’t, and declared that he’d seen “no question of our credibility” from allies when there had been a lot.

“Biden has even flubbed scripted remarks,” Thompson added. Case in point, while wrapping up remarks to a group of union supporters at the White House on Wednesday, the President awkwardly told the crowd: “I’m supposed to stop and walk out of the room here.”

Remarking that “Biden seems almost delighted by the prospect of tussling with the reporters,” like Peter Doocey of Fox News, Thompson pointed out that such unpredictable exchanges create “the occasional high-wire act for the White House.”

This is the kind of unflattering inside gossip that the liberal media love to seize on during Republican administrations. So the question is, when will NBC, ABC, CBS, CNN, and MSNBC all start hyping this Politico story?