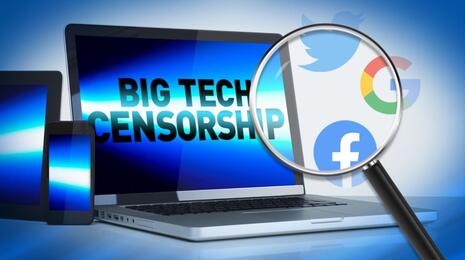 You might expect (in sane times) the press would be in favor of more freedom of speech. Instead, Politico is not only uncritically covering social media justifications for censorship, they also appear unfazed about the government getting into the Big Brother act as well.

This was the message promulgated by “tech lobbying and influence” reporter Emily Birnbaum on Thursday in “4 takeaways from POLITICO’s first tech summit.” The first (and most important) takeaway for Politico is censorship, censorship, and MORE censorship! The subtitle of the article is “Self-regulation isn’t going to cut it, according to lawmakers and advocates.”

Self-regulation isn’t going to cut it. In the face of impending regulatory threats, some tech companies proactively made changes to the way they do business: Apple implemented new privacy features, Facebook and Google have doubled down on efforts to remove misinformation, and more. But, according to lawmakers and advocates, no amount of defensive efforts by the tech industry is going to save companies from impending government intervention.

Social media censorship just won’t do the trick. We need to have an army of Winston Smith government bureaucrats to memory hole “misinformation” for us.

“One of the things I like to say to the companies is … ‘If you’re willing to do it yourself, then why are you opposed to putting it into law?” said Sen. Amy Klobuchar (D-Minn.), the chair of the Senate Judiciary antitrust subcommittee.

K. Dane Snowden, the CEO of the Internet Association, said he doesn’t think Silicon Valley gets enough “credit.” He said policymakers (and the White House) often overlook what the companies are doing “to promote vaccinations and vaccines” for Covid-19 and to remove misinformation related to the pandemic. But later, Klobuchar pointed to a study showing that people are less likely to be vaccinated when they say Facebook is their primary source of news. “Enough is enough,” she said.

This is rather ironic coming from Amy Klobuchar since she grudgingly admitted to Michael Smerconish in 2020 that her husband was treated for his COVID-19 with hydroxychloroquine which is one of those taboo “misinformation” treatments at YouTube and most of the rest of the social media. It was also the Klobuchar attitude that also made any discussions of the origins of COVID-19 labeled as taboo misinformation if it did not conform with the authorized narrative that it could only have come from bats in the wild. Any hint that it could have been from a lab leak was denounced and censored.

A poll of summit participants produced this poll result:

What issue has contributed most to the rift between Washington and Silicon Valley? Fifty-nine percent of participants said disinformation and misinformation on social media has been the most important point of division.

It’s quite clear that Washington — legislators and journalists alike — want a tight clamp on social-media “misinformation” to reinforce their favorite narratives. Free speech loses. It leaves too much to chance.