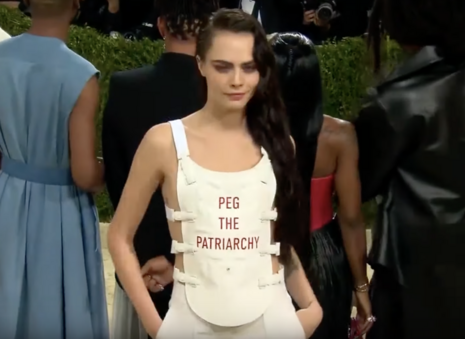 Socialist Rep. Alexandria Ocasio-Cortez grabbed all the headlines from this week’s Met Gala with her “Tax the Rich” dress, letting another even more outrageous message outfit fly under the radar that’s now facing charges of “classic appropriation” and “colonialism.” Strap in (ahem) for the ridiculous.

“It’s about women empowerment, gender equality — it’s a bit like, ‘Stick it to the man,’” Delevingne explained on the red carpet.

Of course, feminist geek site The Mary Sue found people upset about the phrase for the most absurd reasons:

Turns out, Matatas, a self-described “fat, queer, POC…working twice as hard just to do what I’m already amazing at” because of business barriers “[f]rom censorship to patriarchy to racism,” had trademarked the phrase “Peg the Patriarchy” in 2015 but got no credit from the model or her famous designer, which she dubbed “colonialism.”

“When I realized the designer was Dior, I was like ‘Oh, God,'” Matatas said. “It’s classic appropriation. We’re talking about people with a lot of privilege. It really would have been so easy for us to link arms and lift each other up.”

Even Delevingne’s status as a co-owner of a sex toy company who describes her sexuality as “like a pendulum swinging” wasn’t any match for Matatas in the woke victim hierarchy.

But Matatas said white, cisgender people like Delevingne “don’t face the same kinds of challenges because of their social location.” Matatas said small businesses in the sex industry like hers face constant censorship on social media for their content, which hurts their brand awareness and growth.

Her small brand could never access the same advertising scale or influencer resources that big-name brands like Dior can because of these barriers. Even performing sexuality on a red carpet without consequence is a privilege, she said.

The Mary Sue also criticized Delevingne, “[T]here’s something especially sinister about seeing a woman who self-identifies as a feminist and an activist co-opt a progressive message taken from an artist to wear to a high-profile arts fundraiser.”

Yeah, that’s what’s sinister about “Peg the Patriarchy.” These people are so woke they’re unconscious.