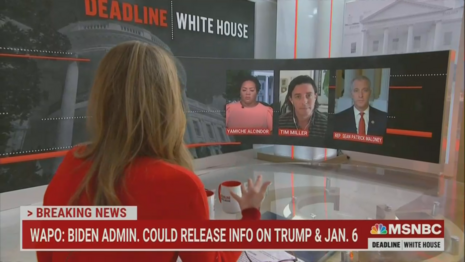 On her MSNBC show on Thursday afternoon, Nicolle Wallace, who’s been touted as the logical replacement for Rachel Maddow should she give up her primetime gig, sounded like an unpaid Psaki as she repeatedly touted Biden’s campaign pledge to restore the “soul” of our nation. PBS White House reporter Yamiche Alcindor joined in, like it was a choir rehearsal.

The topic was the very partisan January 6 probe. Comically, Nicolle asked “How is this White House calibrating with what has become an extremely bipartisan investigation. Liz Cheney has been elevated to vice chair.” She wanted Alcindor to talk about the Biden team handing over Trump’s communications. This is somehow nonpartisan. Worse yet, it’s healing the “soul” of America.

YAMICHE ALCINDOR: Biden ran in the first place, when I talk to White House officials, they tell me—and they remind me often— President Biden ran to heal the soul of the nation.

Is that what we’re seeing today? Biden healing the country?  What an absurd notion!

Twenty minutes later, Nicolle repeated her line to justify the 1/6 committee: “Yamiche, you wisely gave us this broader frame of why Joe Biden ran for president. It was after Charlottesville, to restore the soul of the nation. I wonder if you can expand on that.”

Then again, at the top of the 5 pm hour, Nicolle touted her old boss George W. Bush “exiting political retirement to help congresswoman Liz Cheney wage her war for the soul of the GOP. In some ways, it aligns Cheney and Bush with President Joe Biden’s campaign to save the soul of the nation.”

It’s more than a little weird that the party increasingly dominated by the non-religious would make all these appeals to soul-saving.

As we’ve so often seen, Biden gives off the vibe that he’s lost track of what he’s supposed to say, and who he’s allowed to call on. His own staff is forced to cut his mic lest Biden make yet another gaffe. To depict this bumbling president constantly being managed by a staff of censors as some sort of savior of democracy is nothing less than laughable!

MSNBC laughably repeating that Biden ran for president to “restore the soul of the nation” was sponsored in part by Hyundai, Progressive, Verizon, and DirecTV.