The Acostas and Stelters and Tappers would rage when President Trump “demonized” the press corps as badly behaved brats. But apparently, it’s okay when Joe Biden does it.

It wasn’t CNN, but the RNC that noted Biden’s latest outburst when he sat down with Indian prime minister Narendra Modi in the White House.

“The Indian press is much better behaved than the American press…I think, with your permission, you could not answer questions because they won’t ask any questions on point.” pic.twitter.com/VppL7973ma

“I think what we’re going to do is bring in the press,” the president warned. “The Indian press is much better behaved than the American press. I gotta watch out though, they’ll knock one of those down.” 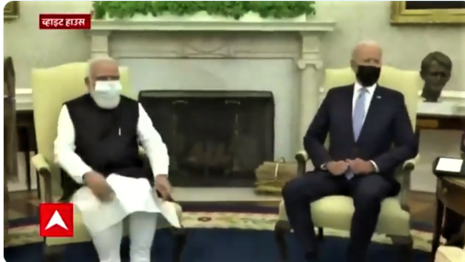 No doubt referring to Boris Johnson welcoming questions from the British press the other day, Biden added “I think, with your permission, you could not answer questions because they won’t ask any questions on point.”

In the latest dent in the “most transparent administration” in history, Breitbart reporter Charlie Spiering noted Biden’s comments were censored out of the official White House transcript on the White House’s website.

Brian Stelter’s “Reliable Sources” newsletter on Friday night made no mention of the Biden remarks to Modi. He led with “MAGA Media In Denial,” over the failed attempt to audit Maricopa County’s votes in Trump’s favor. Stelter mocked Fox for barely mentioning this….as he avoided the Biden-embarrassing parts.

Stelter didn’t breathe a word of it on his Twitter feed. There’s nothing in the Acosta or Tapper Twitter feeds, either. Are they “pro-press,” or just anti-Republican?