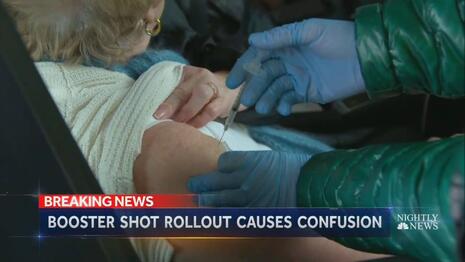 Monday’s evening newscasts were a demonstration of which broadcast networks could follow the Biden administration’s orders the best after Press Secretary Jen Psaki scolding the White House press pool for accurately calling the rollout of COVID booster shots “confusing.” ABC’s World News Tonight and CBS Evening News were good teacher’s pets and omitted the reality from their coverage, but NBC Nightly News bucked as they highlighted states that were widening the eligibility range.

We know of Psaki’s order to the press pool thanks to a soundbite from Fox News Channel’s Special Report and White House correspondent Peter Doocy:

DOOCY: And the administration is not taking responsibility for a rocky rollout of boosters; blaming reporters instead.

ABC anchor David Muir and correspondent Eva Pilgrim were marching in lockstep with the administration’s directive and lauded the White House for their efforts.

This was an obvious change of messaging for ABC. A little over a week ago, on September 19, This Week fill-in host Martha Raddatz had asked Dr. Anthony Fauci about the administration’s botched booster rollout where she called it “confusing”:

You know, you yourself have said how important consistency is, and you mentioned earlier President Biden talked about planning for September 20th rollout for all Americans. I know he said planning, I know he said it depends on the FDA, but isn’t a timeline like that just confusing to people?

There was a similar spin from CBS anchor Norah O’Donnell and transportation correspondent Errol Barnett as the former excitedly announced: “Tonight, two out of every three American adults are fully vaccinated and the next wave of booster shots is underway, with President Biden wasting no time getting his today.”

“Americans are lining up to get the Pfizer booster shot after CDC cleared the way Friday for millions or those at high risk to get a dose,” added Barnett.

But it was NBC Nightly News that bucked the Psaki’s prescribed narrative for the press to peddle. After also noting that Biden had gotten his booster shot, correspondent Gabe Gutierrez noted that there was a lot of “confusion,” highlighting states that were expanding eligibility:

GUTIERREZ: But now critics say his administration’s booster rollout has been confusing. Some states are handling it different. Vermont limiting boosters to those 65 and older. West Virginia’s governor urging people 18 and older to get them.

GOV. JIM JUSTICE (R-WV): They’re dancing around it with some gobbledygook language, but they opened the flood gates wholeheartedly and everything to say, go get your booster shots.

This wasn’t the first time NBC had admitted there was confusion with the messaging of boosters. Just last week (September 21), anchor Lester Holt kicked off the program by declaring: “We have been under an avalanche of confusing information about COVID vaccines and booster shots led by the White House’s premature push for those extra shots every one to start today.”

This obedient media spin was made possible because of lucrative sponsorships from Ford Motor Company on ABC and Mr. Clean on CBS. Their contact information is linked so you can tell them about the biased news they fund.

The relevant portion of the NBC transcript is below, click “expand” to read:

PRESIDENT JOE BIDEN: I’m going to get my booster shot and right here.

GABE GUTIERREZ: At the White House today, President Biden rolling up his sleeve, getting a COVID vaccine booster eight months after getting his first two doses. 23 percent of Americans still haven’t gotten any shots.

GUTIERREZ: But now critics say his administration’s booster rollout has been confusing. Some states are handling it different. Vermont limiting boosters to those 65 and older. West Virginia’s governor urging people 18 and older to get them.

GOV. JIM JUSTICE (R-WV): They’re dancing around it with some gobbledygook language, but they opened the flood gates wholeheartedly and everything to say, go get your booster shots.