Joe Scarborough: not just an ex-Republican anymore. Now, a tough-guy Democrat strategist! On Thursday’s Morning Joe, a screaming, table-pounding, finger-pointing Scarborough [see screencap] demanded of Democrats: “listen to me! Listen to me!” as he advised them to use hardball tactics against the Republicans on the debt limit.

Scarborough’s advice consisted of demanding that Chuck Schumer look Mitch McConnell in the eye, and tell him that Dems would supply 50 votes to raise the debt limit, but not one vote more. (Ultimately, the debt ceiling was raised.) And if the markets and the economy crashed, to warn McConnell that it would be on Republicans.

Everyday, Democrats need to have a vote on this everyday between now and the date of the default. And they need to post the 50 Democrats who voted for it, and on the other side they need to put the Republicans that voted for it and have a big zero. [Begins shouting] Come on! Democrats! Listen to me! Listen to me! You’re giving them the 50 votes. Give them nothing else…. 50 votes. That’s all you’re going to get from us. If you can’t get 10, then the markets crashing, the economy buckling, the recovery dying. It’s going to be on all 50 Republicans.

In the meantime, Scarborough counseled Dems to hold a vote on the debt limit every day until the default deadline, and to diplay charts showing the 50 Dem votes and the zero Republican ones.

To use one of Scarborough’s favorite phrases, Joe was a runaway beer truck whose rant Mika couldn’t stop. “I’m not finished!”, he insisted, going church-style and asking, “can I get a witness?”

Ex-Republican Joe Scarborough playing the tough-guy Democrat strategist, advising Democrats to play hardball with the Republicans over the debt limit was sponsored in part by Safelite, Allstate, and Sleep Number. 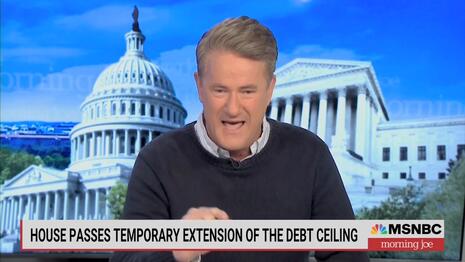 Everyday, Democrats need to have a vote on this everyday between now and the date of the default. And they need to post the 50 Democrats who voted for it, and on the other side they need to put the Republicans that voted for it and have a big zero.
. . .
Are they that loyal to a party that they see all 50 Democrats voting to increase the debt limit, to save our economy. To save the markets. But  they’re not going to vote for it [adopts crying voice] because they’re told not to vote. Who are these people? They won’t vote for it to save the economy because they’re being [crying voice] told by leadership not to save the economy?

This doesn’t seem hard. I got to say — this does not seem hard to me. I know it’s hard to Democrats because they don’t think that way. They need to start [pounds table] thinking that way.

SCARBOROUGH: I’m not done yet.

SCARBOROUGH: Can I have a witness? They need to start thinking that way.