For CNN, there’s only one perspective on big government: bigger is better!

On New Day, the hosts and panelists could only see the positives of a $1.7 trillion spending bill, and could only hope for more.

The emphasis was on what people will be “getting.” The notion was that it is up to government to address every supposed need. There are endless “crises” that the government must solve with new programs. It was acknowledged that some people will be even “disappointed” to learn that the bill is only $1.7 trillion, instead of the $3.5 trillion that Dems had advocated.

Co-host Brianna Keilar “helpfully” chipped in to say that while the current bill is “gigantic,” there remain additional pieces “that need to be in place.” CNN commentator Jess McIntosh naturally agreed, hoping that we could “do more” to address a variety of “crises.”

And in the ultimate paean to big government, CNN commentator Errol Louis hailed the bill as “our version of the New Deal.”

Let’s remember that FDR’s New Deal did nothing to end the Depression. It set our country on the path to soft socialism. And whereas Louis claimed that the bill will move us toward cutting child poverty in half, he ignored the utter failure of LBJ’s War on Poverty. Trillions have been spent since he began it in the 60s, yet by virtually every metric of social and economic well-being among the people it was intended to help, things have actually worsened. 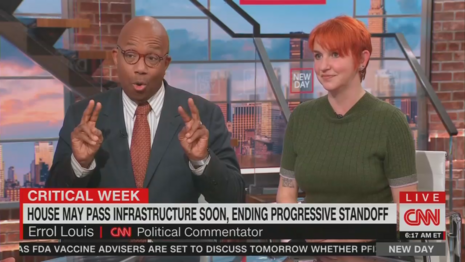 Of course, there was no mention of the crushing new taxes that will accompany the bill, and how they will hurt not only the people and corporations targeted, but average Americans who work for and buy from those people and companies.

And the liberal media can’t conceive that some people will be disappointed to learn that Manchin has reportedly agreed to as much as $1.7 trillion. That millions of Americans actually still believe in individual liberty and self-reliance, and reject cradle-to-grave government “help” [read, intrusion] into our lives.

CNN’s suppport for the Democrat $1.7 trillion spending plan, while wishing for more, was sponsored in part by Samsung, Lexus, Tractor Supply, and FlexSeal.

ERROL LOUIS: There’s a lot resting on this this done, imagine dental and vision for seniors forever—or, at least for a few years and then it becomes forever. Imagine help for kids going to community college. Or, at the other end of the scale, pre-kindergarten learning for people; the child tax credit. This is big, big, big, stuff. It’s our own version of the New Deal.

BRIANNA KEILAR: It is a huge, social safety net, right? Even initially with six trillion. Now it’s less. But it’s still gigantic. There’re still pieces that need to be in place here though, Jess.

JESS MCINTOSH: I think we’re looking at, do we address as many crises as we can for a shorter period of time, or do we whole-cloth jettison jobs, or education, or childcare, or care-economy programs that we need? . . . I’m hopeful. I’m going to look for the attitude, that kind of attitude, and hope that we do more in a moment when we need to be doing more.

BERMAN:  How much of this is about the framing, though? It’s interesting. You talk about what your worried will not be in it. And Errol, I’ve been reading members of congress who say, we’ve got to start talking about what people will be getting that they haven’t been. Where there’s zero now, there will be $1.7 trillion worth.

LOUIS: That’s right. We’ve been reporting it for months now as $3.5 trillion. Will it get done? And to a certain extent there are people waking up this morning and will probably be disappointed to hear it’s only $1.7 trillion. We’ve gotten, I think, a little spoiled in this pandemic era about a trillion here and a trillion there.

The reality is that if you’re moving toward cutting child poverty in half, that is a monumental achievement that people have dreamt of for generations. And to go further down that road, whether it’s child care or other enhancements, that’s a big, big deal!