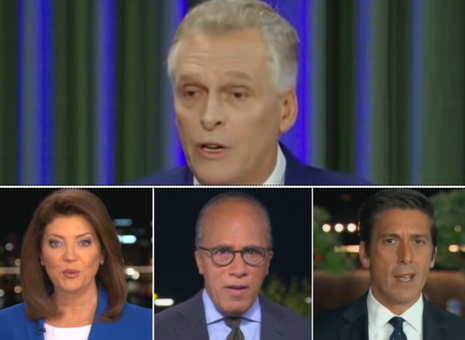 Fox News reported Oct. 27 that the former Virginia Governor McAuliffe (D) spent “nearly $100,000 advertising ‘fake news’ websites on Facebook during the Virginia gubernatorial campaign.” In addition to McAuliffe’s account on Facebook, he also “operates another Facebook page that blurs the lines between a political campaign and disinformation,” reported Fox News.

The Download VA page, which voters reportedly encountered through paid advertising, has “sprinkled among the links to legitimate media” covering McAuliffe’s campaign favorably “seven separate advertisements (and dozens of variations) that promote websites widely considered to be ‘fake news.’” ABC World News Tonight, CBS Evening News and NBC Nightly News all ignored the story during their Oct. 27 broadcasts, seemingly doing their utmost to ensure McAuliffe is insulated from more controversy before the Virginia gubernatorial election.

One of the ads reportedly included a link to The Virginia Dogwood, which is owned by leftist activist Tara McGowan’s Courier Newsroom, where she is listed as CEO. Courier Newsroom has been panned by Open Secrets as a “fake news” organization backed by leftist “dark money” group ACRONYM, also founded by McGowan. ACRONYM was also the group involved with the 2020 Iowa Democratic Caucus app fiasco. Bloomberg News published a story on Courier Newsroom in 2019 headlined: “The Left’s Plan to Slip Vote-Swaying News Into Facebook Feeds.” McAuliffe is apparently capitalizing on McGowan’s “fake news” scheme.

Media ethics experts who spoke to Politico, which reported on the existence of Courier Newsroom in 2020, called sites like the Dogwood political tools that are ‘pouring gasoline on a raging fire of consumer trust and online disinformation.’

As McGowan reportedly told Axios concerning Good Information Inc.: “‘The information crisis we’re in is so much bigger than politics.’” McAuliffe’s actions make the pontificating by McGowan out to be a worthless joke.

The Big Three’s censorship of the news follows a derelict pattern of the networks censoring bad news that could taint the Democratic Party brand. Turning a blind eye to McAuliffe promoting reportedly “fake news” websites because they speak favorably of his campaign is par for the course.