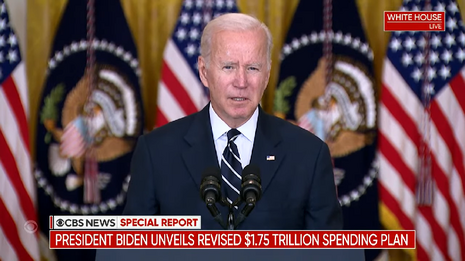 Almost all news outlets, including the liberal media, admitted that the failure of Congress to pass the Bipartisan Infrastructure Bill on Thursday, despite Joe Biden begging them to give him this win, was a fail for Biden. However, the attitude at Politico was absurdly Winner, Winner, Chicken Dinner!!! This bizarre reaction was reflected in Friday’s Politico Playbook title, “Why Joe Biden already won.”

If that didn’t make you take notice, then the text which spun the sinking of Biden’s hopes as somehow a great victory, will leave you gasping at the hilarious absurdity of Politico‘s spin:

BIDEN GETS IT DONE, DESPITE HIMSELF — To say Thursday was a roller coaster for President JOE BIDEN’s agenda wouldn’t do justice to how truly head-spinning the day was. The White House releases a Build Back Better (BBB) deal backed by MANCHINEMA (now they’re getting somewhere) — only to watch BERNIE SANDERS balk (never mind). The president delays his trip to Europe to rally House Democrats behind his plan — then whiffs, somehow neglecting to deliver the tough love message Democratic leaders wanted him to so they could pass the bipartisan infrastructure bill (BIF) this week.

But just when it looked like the day would end in embarrassment for Democrats, the Congressional Progressive Caucus issues a surprise endorsement of the president’s compromise plan — removing one of the last big obstacles in its way.

The CPC’s decision to back the new BBB framework got drowned out by the group’s refusal to allow a BIF vote Thursday before full text was drafted. That deprived Speaker NANCY PELOSI of the vote she was determined to hold on BIF, and yielded lots of headlines about Democrats’ failure to clinch the win.

But the dispute over sequencing masked a major achievement for the president: Hill progressives now appear ready to swallow this deal — and that means it’s likely a matter of when, not if, it passes.

The fact that the group isn’t making demands for major changes is quite something given that many of their priorities were significantly scaled back as moderates got most of what they wanted.

Um, okay Politico. If you say it was a great victory for Biden then it must be true…in your imagination — especially since “Manchinema” never actually said they were backing the “BBB” deal. Meanwhile even other liberal media outlets were rather downbeat on what the failure to pass the bill meant for Biden. An example was the Daily Beast which on Friday headlined the Politico “win” for Biden as “Dems Leave Biden Empty-Handed Again After Chaotic Day on Capitol Hill.”

With his agenda in peril in advance of an international climate summit, President Joe Biden came to Capitol Hill on Thursday and pleaded with House Democrats to pass a $1 trillion infrastructure bill—to prove to the world that American democracy actually can work.

The scene inside the closed-door meeting became so earnestly patriotic and rah-rah that, in between cheers for the president, some lawmakers broke into a chant of “Vote! Vote! Vote!”

But as soon as Biden left the Capitol and boarded Air Force One en route to Europe, the impromptu episode of The West Wing ended. Lawmakers snapped back to the realities of American democracy. And it was a mess.

…Pelosi’s leadership team also began whipping the legislation—something they didn’t do a month ago when the infrastructure bill was first supposed to pass the House.

But the whipping efforts quickly collided with the truth that there aren’t 218 Democrats ready to pass that bill without stronger assurances from Sens. Joe Manchin (D-WV) and Kyrsten Sinema (D-AZ) that they would in turn pass the other plank of Biden’s agenda.

…The path ahead now remains unclear. One lawmaker said as many as 40 Democrats are prepared to vote down the infrastructure bill if an agreement with Manchin and Sinema is not reached. And a statement from the Progressive Caucus reaffirmed that a number of members in that group wouldn’t vote for the infrastructure measure without stronger assurances.

The problem is, however, that the two senators everyone is waiting on don’t seem any closer to declaring their support in a firmer way. Nor do they seem inclined to explain much of their position.

But I thought Politico told us that Manchinema BACKED the “BBB” deal? Didn’t  you get the word, Daily Beast? “Joe Biden already won” according to the Politico cheerleaders who probably don’t want to burn their bridges to their White House spin narrators.