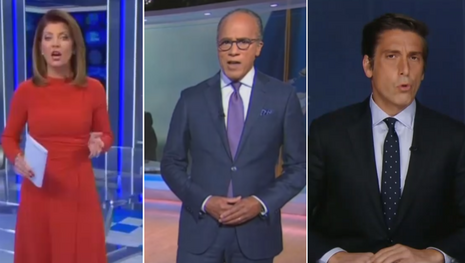 The Commerce Department’s new report showed that third quarter annualized GDP growth was an abysmal 2 percent. Bloomberg News referred to it as the “[w]eakest” growth of the pandemic recovery. The Oct. 28 report indicated a major collapse from the 6.7 percent annualized pace in the second quarter. That’s a 4.7 percentage point contraction.

It gets worse: the 2 percent figure was even lower than the median forecast of 2.6 percent growth estimated by economists surveyed by Bloomberg News. “The deceleration reflected a sharp slowdown in personal consumption, which grew at just a 1.6% pace after a rapid 12% jump in the prior period,” according to Bloomberg News. Guess what: none of this atrocious news was apparently worth any coverage. ABC World News Tonight, CBS Evening News and NBC Nightly News all ignored the story during their Oct. 28 broadcasts.

Bloomberg News blamed the anemic growth on “[s]hortages, transportation bottlenecks, rising prices [inflation] and the delta variant of the coronavirus.” It continued: “The latest data underscore how unprecedented supply constraints are holding back the U.S. economy. Understaffed and short of necessary materials, producers are struggling to keep up with demand.” FreedomWorks economist Stephen Moore called the report a bellwether for stagflation.

The networks have implicated themselves in actively trying to salvage Biden’s image by not reporting the GDP news to viewers. But, apparently, their agenda isn’t working. A recent Axios/Ipsos poll of 1,038 U.S adults found that “[c]onfidence in President Biden’s ability to rescue the economy from COVID-19 has dropped since January.” Confidence has dropped from 52 percent at the beginning of the Biden presidency down to 44 percent now. Here’s the eye-opener, according to Axios: “It’s Democrats and independents driving the declining economic confidence.”

The Big Three have developed a particular skill in protecting the Democratic Party brand from the furor of Americans. All three networks ignored a report showing that Virginia gubernatorial candidate Terry McAuliffe (D) spent “nearly $100,000 advertising ‘fake news’ websites on Facebook during the Virginia gubernatorial campaign.” Even more telling was that the Big Three also ignored the release of multiple polls showing McAuliffe’s Republican opponent Glenn Youngkin pulling ahead in the race for governor.

That’s not all. The broadcast networks also ditched coverage of McAuliffe being reportedly tied to a law firm that “fights against rape victims and with which he has taken a paycheck as recently as this election year.”