Pro tip for the pro-abortion crowd. When discussing abortion, don’t make analogies to ax murders. If you do, most people will likely think of what happens to the unborn babies whose lives are taken.

In a strained attempt to connect current events with Halloween, she said, apropos of the Supreme Court arguments tomorrow on the Texas abortion law:

“It is kind of like, since we’re approaching Halloween, so you know in scary movies when the scary music starts building, and you know someone’s about to get ax murdered, that’s essentially the music we should be hearing right now before this Monday argument.” 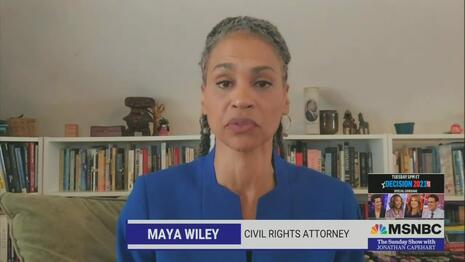 Here’s a thought for Planned Parenthood: consider playing that kind of scary music in your waiting rooms.

Note that Wiley claimed that in Roe v. Wade, the Supreme Court “upheld” the constitutional right to abortion. No, it didn’t uphold that right: it fabricated a non-existent right out of thin air. That’s something that an honest MSNBC legal contributor has effectively acknowledged.

A pro-abortion MSNBC guest, making a horrid analogy suggesting that the SCOTUS case on the Texas abortion law brings ax murders to mind, was sponsored in part by T-Mobile, Safelite, and Procter & Gamble, maker of Downy.

JONATHAN CAPEHART: Maya, the abortion arguments are tomorrow, they’re on Monday. Why is — why should we be watching with great interest this case on Monday?

MAYA WILEY: Well, it’s wonderful to be with you, Jonathan, and I miss and love you too. The reason this is so important is it’s kind of like, since we’re approaching Halloween, so you know in scary movies, when the scary music starts building, and you know someone’s about to get ax murdered? That’s essentially the music we should be hearing right now before this Monday argument.

Because what’s going to happen is two cases coming out of the Texas abortion ban, the bans on women’s bodies that said, okay, we as the state won’t tell you can’t get an abortion. But we will just say anybody, whether they know you or not, whether they have any connection to you or not, can sue a provider and get damages because you want to have an abortion.

And what that’s done is brought virtually to a standstill all abortions in the state of Texas. Now, this case is going to be procedural, but what it’s going — what that procedure is important — because it’s going to determine whether or not the state of Texas can get away with intentionally trying to undermine a constitutional right that the Supreme Court upheld in 1973.

And say, we are going to pretend you still have the constitutional right, but we’re going to let states copycat this law and essentially create an end run around the constitutional rights of people who otherwise would have — right to abortion. And that is going to be a bellwether for what happens on December 1st, when they take up the Mississippi case, which goes the direct run against Roe V. Wade. So that’s why I say it’s like the building horror music.