Hollywood often works closely with abortion giant Planned Parenthood, but a recent drama on Starz brought back an old Planned Parenthood lie in a portrayal that might not jive with the brand’s new, more unapologetically pro-abortion tone.

In the October 31 episode of Starz’s Hightown, “Fresh as a Daisy,” viewers’ suspicions are confirmed that Renee Segna (Riley Voelkel) is pregnant with Detective Ray Abruzzo’s (James Badge Dale) baby, not her fiancé’s, Frankie Cuevas (Amaury Nolasco), a drug kingpin who was recently released from prison.

Renee decides she’s going to schedule an abortion upon being told at her Planned Parenthood appointment that a fetal paternity test will be dangerous for the “baby.” Yes, we’re actually supposed to believe that a Planned Parenthood employee would use the word “baby,” not dehumanizing language like “fetus,” “clump of cells,” or “product of conception.” Even more beyond belief, the abortion worker first offers prenatal care, only mentions abortion once prompted by Renee, and shows concern for the well-being of the baby. Only Hollywood could dream this fantasy up!

Doctor: Sorry for the delay. Lab’s been backed up all day.

Doctor: Is this a surprise?

Renee: Well, it wasn’t exactly planned, that’s for sure.

Doctor: Well, okay. You have some decisions to make. If you plan to keep the baby, we can get you in today, do a full prenatal workup, make sure everything’s okay.

Doctor: If you choose to terminate, we can perform the procedure up to 20 weeks.

Renee: Is there any way to tell if the baby is, um, white or Dominican?

Doctor: Are you asking about a fetal paternity test?

Renee: No. No, it’s not. Pretty fucking sure who the father is. That’s the problem.

Doctor: Anyone you can talk to about this?

Renee: I don’t need to talk to anyone. We can go ahead and schedule the abortion.

Doctor: All right. Well, you can get dressed and meet me in the front.

While Planned Parenthood may claim to offer prenatal care, something they’ve listed on their website and touted in the past, an investigation in 2017 from Live Action found that this is not the case at most locations. The service was ultimately scrubbed from many locations that claimed to offer it. The number of prenatal services that Planned Parenthood offers has also dramatically decreased over the years, all while abortions increased.

The nation’s number one killer of the unborn, Planned Parenthood has gotten more overt in its abortion activism, even firing former President Leana Wen when she wanted to put the focus on women’s health, so this inaccurate portrayal is actually out of step with the abortion giant itself. Current President Alexis McGill Johnson disavowed old Planned Parenthood mantras about abortion being only 3% of what they do by saying, “I think when we say, ‘It’s a small part of what we do,’ what we’re doing is actually stigmatizing it.”

In a subsequent scene, Renee returns home, only for Frankie to enter their bedroom soon after and try to entice her into having sex with him. She’s evasive and turns him down, claiming she was at the gym, but also saying that she has “really bad cramps,” leading us to believe she’s either just had the abortion or is avoiding intimacy with him because of guilt over the impending procedure.

Either way, in the end, Planned Parenthood gets its pound of flesh, which is all they care about, anyway. 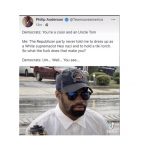