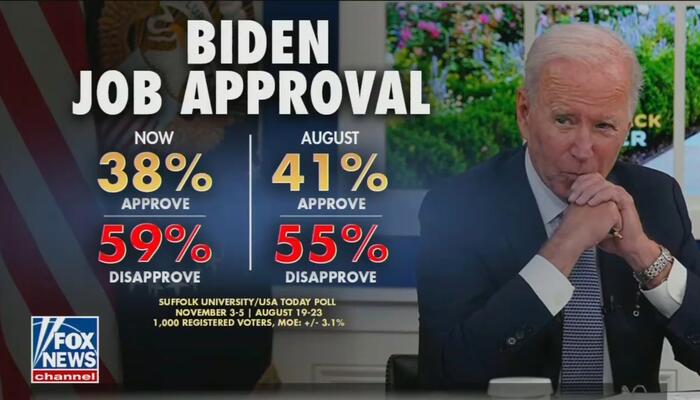 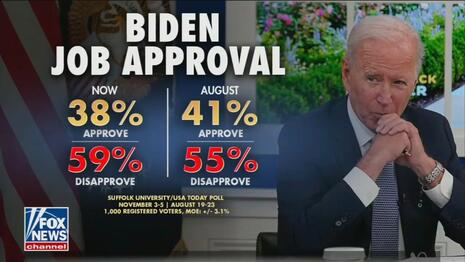 A major polling outfit on Sunday released terrible numbers for Joe Biden, finding him at his lowest level yet, just 38 percent approving of his job. However, the networks on Sunday night and Monday morning censored the new poll from USA Today/Suffolk University. The poll also found that a shocking 64 percent of Americans don’t want Biden to run for reelection, including 30 percent of Democrats.

CBS Mornings on Monday offered what could be a vague reference. Speaking of the infrastructure deal, Nancy Cordes ambiguously mentioned: “Democrats are really hoping it’s going to help shore up some of the President’s poll numbers after the party took a series of hits in state elections last week.” 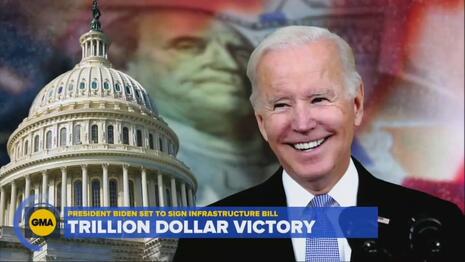 Operating in some kind of bizarre, parallel world where everything is fine, co-host George Stephanopoulos opened Monday’s GMA with a smiling, happy President: “Trillion-dollar victory. President Biden set to sign that massive infrastructure bill after weeks of Democratic wrangling. Now will the President be able to get the rest of his economic agenda across the finish line?”

It’s not like this wasn’t a major poll. It’s on the front page of Monday’s USA Today, a national newspaper. Writers Susan Page and Rick Rouan explained:

A year before the 2022 midterm elections, Republicans hold a clear lead on the congressional ballot as President Joe Biden’s approval rating sinks to a new low of 38%.

A USA TODAY/Suffolk University Poll, taken Wednesday through Friday, found that Biden’s support cratered among the independent voters who delivered his margin of victory over President Donald Trump one year ago.

If the midterm election were today, those surveyed say, they would vote for their Republican congressional candidate over the Democratic one by 46%-38%, an advantage that would bode well for GOP hopes of gaining a majority in the House and the Senate.

Approval rating is now at an all time low. Brand new poll from USA Today and Suffolk puts his approval rating at 38 percent. It’s the lowest rating of any modern president history in history, except as they note, the former president Donald Trump. Here’s the interesting thing, 64% of America does not want him to run for re-election. About 30 of them are Democrats.

The efforts to hide the ominous news for Biden tracks with my NewsBusters study from October 26. I explained how the networks covered Donald Trump’s low polling almost twice as much as Biden:

The last three months have been nightmarish for Joe Biden’s presidency. In August, his popularity started to plummet, dropping precipitously so that, by late October, some polls had him dipping into the high 30s as Afghanistan, inflation and an inability to accomplish his domestic agenda have altered a once popular president’s fortunes. But in comparison to Donald Trump, ABC, CBS and NBC had almost double the number of mentions of bad polling for the Republican.

MRC analysts looked at the morning and evening broadcast news programs from August 1, 2021 to October 25, 2021 for Biden vs. August 1, 2017 to October 25 2017 for Trump. While ABC, CBS and NBC mentioned Donald Trump’s unpopularity 37 times, they only noted the rapidly dropping numbers for Biden 19 times.

Journalists are trying to protect Biden and limit the damage of his unpopularity. But as the polling and last week’s terrible elections proved, it isn’t working.

The attempts to hide the sinking Biden presidency were sponsored on Good Morning America by Volvo, on CBS This Morning by Consumer Cellular and on Today by T-Mobile. click on the links to let them know what you think. 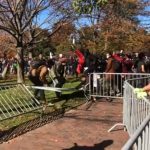 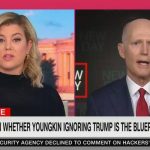